The New Democratic Order’s minions are often demented and mediocre men. The Russian ones, the ones the western media machine elevate in status, they are the most pitiful of all. There’s nothing more reprehensible than a traitor, after all. That is, unless bitter betrayal is accompanied by weirdness – case in point Alexei Navalny and his most recent obsession with Russian Prime Minister Dmitry Medvedev. TIME once called Nevalny the “watchdog” of Russian corruptness – it looks like the dog has grown into something more perverted these days. 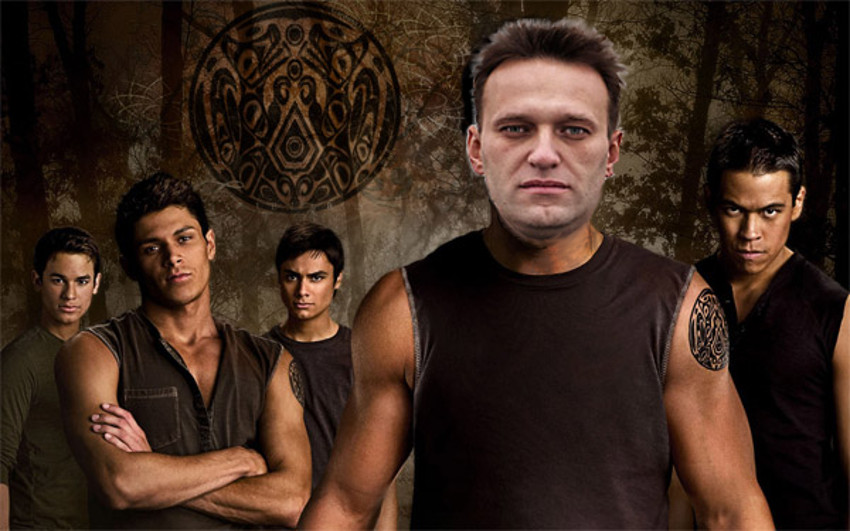 A video by Navalny distributed to his followers via Youtube was sent to me by my colleague Holger Eekhof bearing the subject line “Foot fetishes of Russian dissidents”. And being accustomed to the utter strangeness of the struggling new world order these days, I was not surprised at this labeling. Okay, no wholly surprised. Navalny’s cult is overrun with weirdo connections, but if you watch this amazing video you’ll register my astonishment on your own face.

The not so secret palaces, vineyards, and yachts of Dmitry Medvedev are the subject of a new Navalny investigation prompted by Dmitry’s shoes. Let that sink, deep, deep, deep into your consciousness.

The man who runs about Russia like the proverbial chicken with its head chopped off, the guy who creates a new anti-Putin party every other week, he’s looking at another man’s attire with feverish intentness?  Russia’s ultra-right poster child is backed by the same people that are trying to oust Donald Trump in America, and everyone knows this. But a connection no one has so far made looms heavy now that Navalny’s real “fascination” with Medvedev grows clearer. As a partial observer, I cannot wait for Russia’s version of “Pizzagate” to come out.

Let me set the record straight on Dmitry Medvedev’s “secret” holdings. According to his evangelistic ranting in this video, the men’s fashion discerning Navalny has busied himself in deep, deep, deep study of a billion dollar empire the Russian Prime Minister “owns”. Navalny’s foot fetish inspired research elicited the Daily Beast’s chief Putin hater, Michael Weiss’ support late last year. Last October the Mikhael Khodorkovsky minion showed the world drone footage of an estate “used” by Medvedev. Once the drone footage came out, all the typical suspects like the Beast, Radio Liberty, and US State Department media hammered down on a man with little time for corrupt dealings. And all because Navalny think he looks good in his sneakers and bright colored clothes! Let me quote directly from Navalny’s “You Do Not Dimon” site:

“Detail. Just a funny little thing like a sneaker or shirt with a bright pattern can give even the most sophisticated corrupt and become the starting point for his exposure.”

A perfect example of Medvedev activity can be seen from his November, 2016 schedule highlighted by the Russian Prime Minster’s visit to Israel and Palestine. Medvedev then undertook a grueling schedule with meetings and appearances from the Meeting of the SCO Council of Heads of Government on November 3rd to  an interview with Chine Central Television on the 4th. Then on the 7th he was at the 21st regular meeting of Russian and Chinese heads of government, the PR met with with Israeli President Reuven Rivlin and held talks with Prime Minister Benjamin Netanyahu on the 1oth. Medvedev rounded out the month meeting Malta’s PR, attending the meeting of the Eurasian Intergovernmental Council, attending the 2nd World Grain Forum, and in a flurry of meetings and talks inside Russia. Navalny wants his throng to believe Medvedev and the other administration people just bathe in luxurious spoils reaped from the people of Russia.

Reverting to Navalny, the blogger-activist made famous by western press goes on to call Medvedev a “weirdo”, but as far as I can tell Dmitry likes women a lot. Maybe I should just come out with my opinion of this right-wing asshole propped up by equally reprehensible westerners…. The weirdo is the one starting over at your “stuff” in the men’s room, not the one taking care of his own “business”. If I were a conspiracy theorist I’d connect Navalny directly to the LGBT community, and then even more connected with the Clinton-Podesta Pizzagate craziness. I’d also not be surprised to discover Navalny on pleasure Island with Bill Clinton… this man is creepy.

Let’s get down to the facts on Dmitry Medvedev, arguably the poorest of Russia’s upper echelon of leadership. This Plyos dacha called Milovka that Navalny needed foot fetish inspiration to become Sherlock Holmes over, it’s been in real news for years now. This Financial Times story from four years ago could have saved the sellout Russian activist some time. And the “mysterious” yacht Navalny and his super sleuths have uncovered? Oh, the Telegraph reported (erroneously) on that six years ago. I’d to on dismantling the idiot or charlatan Navalny, but my point is well made. The New Democratic Order is pitiful, hapless, and is on its last legs. Turning to not only lying but regurgitating lies to impress the witless following…. Navalny spent time and effort hunting down a man who does Dmitry Medvedev’s online shopping for him – that’s it. A mysterious Vladimir Dyachenko, who is supposedly connected to a Company Tekhinpro, which in turn is connected with Milovka and a winery Medvedev is associated with, is the key to Navalny’s stunning revelation that one of the most powerful men in the world gets to use nice stuff and buy expensive sneakers! There’s no dead bodies connected, no underground 007 bunkers, only some armed guards surrounding a dignitary – Ohh! Navalny has uncovered Professor Moriarity!

Let me tell you what I expect from leaders like Putin, Medvedev, Trump, or any you can name. I don’t give a damn how many yachts or gold courses they have. In all honesty, I could care less if we call them King, Czar, or Mr. President. What matters is results. Dmitry Medvedev is one of the hardest working and effective people in Putin’s administration. Navalny calls attention to the man falling asleep in some meetings etc. Well nobody tracks where Medvedev was the days before, or his flight schedule, the meetings and appearances he’s made. But I can. Sleepy Russians these days are an indicator of workload. I recall Putin’s press adviser Dmitry Peskov dead asleep during a Putin speech not two months ago, and I’ll guarantee you this granite hard spokesperson was not bored.

It’s amazing for me still, the fact outgoing President Barack Obama gets a book deal from Germany’s Bertelsmann that includes a $65 million dollar advance, and Dmitry Medvedev can’t have a secure dacha on the Volga in the middle of nowhere. Dmitry Peskov is hammered over an expensive watch, Putin is relentlessly harangued, and western counterparts steal the world blind. Former US Vice President Dick Cheney can have a dozen houses and retreats from Fairfax to Wilson, Wyoming, and next door to former Defense Secretary Donald Rumsfeld in St. Michaels, Maryland, but a Russian millionaire with a vineyard or a cool crib?

These desperate globalist clowns are running out of gas fast. It Putin does not make fools of them one day, Trump will on another. Medvedev has scant time to dance about in clothes Navalny will gush over, but the Fake News has to operate on a jig danced, a drink of champagne, or one colorful departure from a tailored black suit and tie. No wonder the Russians put restrictions on gay and lesbian demonstrations, the Navalny’s of the country would run naked before the Kremlin tourists.