The headlines these days read something like, “How did Putin manage it?” Well, I think I finally found the answer for ten thousand western journalists. “We are nations led by imbeciles!” 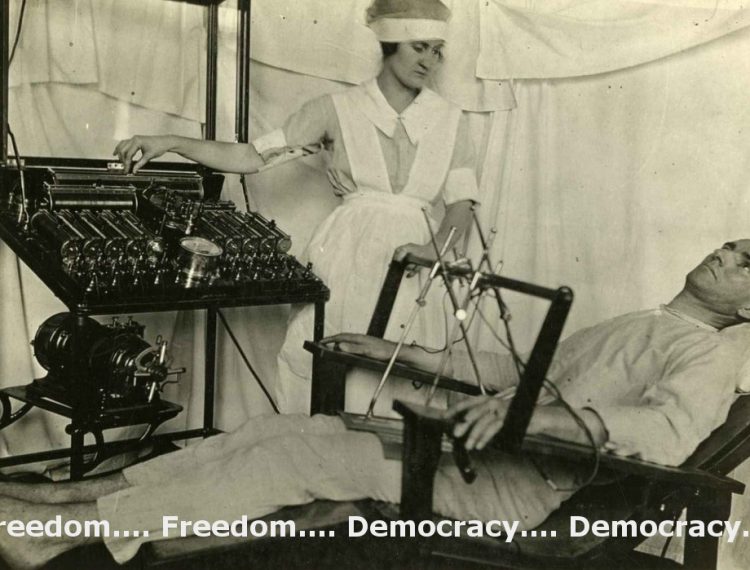 How America became a country full of knee-jerk reactionaries is a far too deep analysis for me to get into here. For the reader on his or her way to work, or hiding internet use from the boss, just knowing we are all fucked up is probably explanation enough. What needs a bit more clarification though, is the outright stupidity and mediocrity of the morons we voted into office. And I do not mean one Democrat or one Republican neither. America is one dangerously out of control steamroller nowadays, just in case you have failed to notice.

Donald Trump just took charge of Nero’s Roman redux in my book. Too much Kool Aide, for far too long, has transformed the dream of worldwide love and peace and equality, into a zombie-like sideshow where NBA stars get standing ovations and internet memes for being able to turn their backs to dribble (see the recent Lebron James stupidity on Twitter), and where James Bond will save humanity from evil Spectre – don’t you worry about that! Plum stupid and downright insane, we all know this is the deadly truth. Just look at round three of the “impeach Trump” lunacy. Russian Foreign Minister, Sergey Lavrov visits our country to take a baby step toward fixing a FUBAR (fucked up beyond all recognition) America-Russia détente, and the White House is all of a sudden passing out state secrets! Next day, Putin and the Russians laugh their asses off and reset the Armageddon clock at the same time, over US schizophrenia. Yesterday, the Russian President told reporters:

“The United States has been developing political schizophrenia. This is the only thing I can think of when I hear allegations saying that the president has revealed some secrets to [Russian Foreign Minister Sergey] Lavrov.”

Then Putin said he is prepared to provide a transcript of the meeting to members of the U.S. Congress, after which Dr. Evil’s (aka Jeff Bezos) Washington Post declared said Congress was laughing back at the Russians. According to our deep state owned media, Sen. Marco Rubio (R-Fla.) led the lunatic laughing on “Fox & Friends.” If you sit and ponder, if you have a brain in your head, watching these arrogant Washington sons-of-bitches will help the reality sink in – we are pretty fairly fucked if we continue to allow these paid off mafia lackeys have any power at all. The madhouse is overflowing, the abnormal brains are boiling up there in D.C., for damn sure. Rubio, as most people interested in Washington crookedness know, is in cahoots with Miami billionaire Norman Braman.

And the “land of the free – home of the brave” zoo-park leadership is further exemplified with Rep. Adam Kinzinger (R-Ill.) calling Russia’s president a “ruthless murderer”, in order to cement peaceful joy and harmony in between America and Russia. Even though nobody has as yet proved Putin stepping on a cockroach, our lamebrained leadership still manages to do a mynah bird “kaw-kaw-polly-wanna-cracker” recitation of a CNN headline any time Putin’s name comes up. Kinzinger is a second rate fly-boy turned corporate ass-kisser who’s still a reserve Air Force major, and required by the corps to pretend to hate the Ruskies. It’s also pertinent to note, this idiot is on the Committee on Foreign Affairs – oh boy! Last month this good Senator advised that the U.S. and the international community needs to deliver targeted strikes against Syrian President Bashar Assad to force a diplomatic solution to the country’s upheaval. So we STILL MUST HAVE REGIME CHANGE!

This rant can end for today. I just wanted to express how our country is on a collision course with catastrophe. Russia has not threatened the United States, Putin is not poised to invade pitiful Europe, and bombing the shit out of everybody on the planet is not buying us true friends. I figure we all know this by now, but some of us are just too fucking lazy or self-centered to even admit it. LOOK WHAT we have put in power at the city, state, and federal levels! America could have done the world and her own people a huge favor letting chimpanzees run policy. Worst case, Russia and the rest of the world mistrust us and arm themselves to the teeth…..