The following is the first draft of Chapter One of my upcoming book “Confessions of a Dedicated Kremlin Troll”. While this is only the draft, it does reflect on how I came to support Russia in the ongoing media and policy conflict. The final book to be released will contain a much more detailed and clear picture window inside the doings of media masterminds and some of the world’s most powerful influencers. I encourage all my fellow journalists and Kremlin or NATO trolls to offer contributions. Be aware though, the list of contributors is fairly gigantic already – after all we are talking about Vladimir Putin’s key operatives, aren’t we? 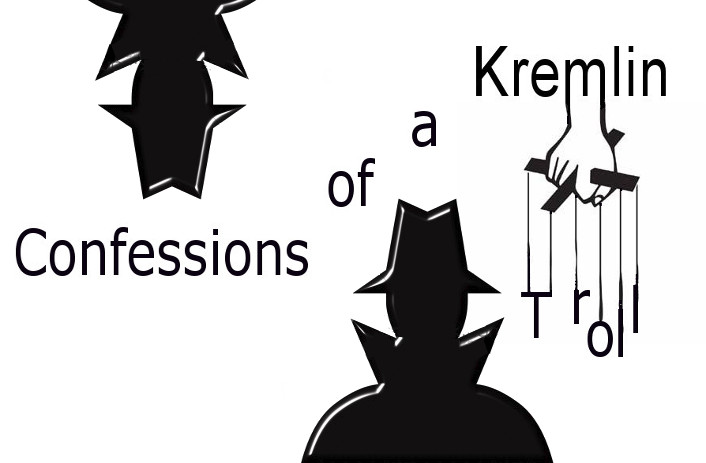 Chapter I – My Kremlin Bona Fides

You bought this book because of the provocative title. The provocative nature of it spoke to something in you. My friends in the business of PR would say my title “resonated” with you, and they would not be wrong. One way or another you are reading what I am writing because you cannot help but want the truth. You want to know about Vladimir Putin. And you also want to know about our own politicians’ role in the current mess. We have so much more in common than any of us truly likes to admit. So I decided to disclose my real role for the Kremlin, and all the players you may have read so much about. Some of you will be surprised at what is really going on behind the scenes, while others will surely feel vindicated.

This “resonance” I speak of reminds me of something from the famous film “A Few Good Men”. In the film actor Jack Nicholson is further immortalized for a famous tirade. Under cross-examination by fellow actor Tom Cruise (JAG Lieutenant Kaffe), Nicholson (Marine Colonel Nathan Jesup) breaks down and yells; “You can’t handle the truth”. His final reply to the naval attorney’s argumentation is telling. The scene is so remembered because we identify. It is revealing in that it tells on our mutual unwillingness to suffer reality, not just our sense of entitlement. The moment in the film is so iconic because it is the truth – most of us just can’t handle our world’s upside-down – the deconstruct is simply too tough.

With this unwillingness in mind, imagine y surprise at becoming the most dedicated of Kremlin trolls. What’s more, try and visualize my own ideological deconstruct after half a century of programing. For old friends and newer ones reading an All American boy’s reports and stories, and my various TV interviews on Russian media must have shocked the pants off quite a few. But before I get ahead of myself let me transport you back to the start, back before I volunteered for the western world’s most unenviable position at the head of Vladimir Putin’s Praetorian guards.

The first time I mentioned Vladimir Putin in one of my articles was in October of 2010 on our Argophilia Travel News. Back then, Prime Minister Vladimir Putin was often mentioned in connection with Russia’s pursuit of closer ties with Europe and the EU, especially where tourism and free visas were concerned. I recall the tourism report “To Russia With Love” about the time Mr. Putin came back from Zurich and Russia’s bid for the 2018 FIFA World Cup. At the time my tone toward Putin and Russia was positive-neutral, owing mostly to my wife’s being Romania, and because Argophilia was positioned to tell about Eastern European travel news. Subsequent stories relayed the ongoing news of the time, and an interview later that year with the folks at Welcome to Russia further amplified the Russian government’s efforts to ramp up the country’s inbound and outbound tourism. Not long afterward Europe and other destinations benefitted greatly from a fairly massive influx of Russian travelers. The stage was set, as I later reported, for a visa-free regime to-and-from Russia. But there was an unseen, by me and many others, problem.

In 2011 Prime Minister Vladimir Putin was in the mix of Russian presidential candidates again. He was also literally begging the EU for the aforementioned visa regimen that would have propelled EU-Russia relations to the next positive level. Another story I wrote for Argophilia reflected the nearly desperate positivity Putin and Russia leveled at Brussels and EU nations. Ironically, my story also mentioned an initiative we would later see taking hold. If I may quote myself here, maybe the reader will be fascinated to read the first translucent glimpse of a Kremlin troll in the making. This is from Argophilia Travel News on October 5th of 2011:

With the Russian Federation literally begging the EU to normalize visa restrictions the last couple of years, and Putin being continually stonewalled by the EU’s core constituents, it’s no small wonder Russia’s most influential leader turned to new strategies. Whether or not his brandishing of this new plan is grandstanding or not? Well, Putin is not exactly known for bluffing.

Another interesting footnote came to my attention while searching for our company’s and each author’s initial referenced to Vladimir Putin. I mentioned my wife’s influence in suggesting I study more closely Putin and Russia. I was fascinated when I ran across a body language article she wrote about Putin’s so-called “gunslinger” arms swing years before western mainstream media proclaimed he had Alzheimer’s disease. A body language expert some years, my partner was also a military journalist for the Romanian Ministry of Defense in the late 1990s and early 2000s. Her report on our Everything PR News was but one neutral-positive report of several about the Russian leader. But while Vladimir Putin and Russia were only really news-centric interests, it’s compelling how accurate and prophetic some of our analysis was.

In 2012 our engagement with Russia involved travel stories mostly. One, in particular, set my eye on Sochi and the coming Olympics of 2014. The Center of Dolphin Therapy there is yet another humanitarian endeavor we’ve become known for publicizing over the years. But what’s really relevant for my future as the No. 1 Kremlin troll is how a tighter focus on Sochi led to my worry over the environment of that pristine environment should Russian development of the games infringe upon the wilderness. Then the 2010 Vancouver Olympics and foreign investment there led to my more vehement concerns over impending environmental catastrophe. Some will recall that Vancouver had its share of PR catastrophes including the First Nations native American lands controversy. We reported on this aspect after an even acuter PR nightmare, the untimely death of Georgian luge athlete, Nodar Kumaritashvili, who was tragically killed because of a track experts claimed was too fast and deadly. While this incident does not play a pivotal role in my work as a Kremlin troll, the effort I personally made for Nodar’s family and justice did set the stage.

Ultimately we uncovered many inconstancies in the Olympic Committee’s treatment of this accident, and our research led to companies from Germany and elsewhere that were riding the fringes of good business practices. Key people at the Olympics and NOC decision makers were not exactly above board in handing Nodar’s death or in the way Vancouver went off. At those Olympics in Vancouver the International Olympic Committee (IOC), the International Luge Federation (FIL), and almost every official entity involved in the Nodar incident had failed athletes and the public miserably. As far as I can remember, the outrage and reporting on this incident was the last time there was any consensus on truth from mainstream media in the west. And while I did not realize it at the time, the disgraceful way Nodar and his family were treated had awakened the activist beast within me.

February 2014 was the year this “sleeper agent” was switched on by those pesky Russians. Or at least this is how some will eventually portray me. In all honesty, I have wondered many times why RTTV called to asked me to go on live television the same day Vladimir Putin opened the Sochi Olympics. Doing my research for the book you are reading, the reasoning is crystal clear. The day before Margarita Simonyan’s team contacted me I posted an article about the upcoming Sochi Olympics and the diatribe western mainstream media was launching against the Russians. Once again our influence with Everything PR News parlayed the dissenting view on negative PR campaigns, and with Putin and Russia in the crisp, positive light. The story; “Time, Richard Stengel, and Time for Better Russia Messaging” involved TIME magazine’s former editor Richard Stengel, and his wielding of the blunt propaganda tool for Barack Obama as Under Secretary of State for Public Diplomacy and Public Affairs. In short, I had framed Stengel and TIME for being part of the greater anti-Russia media cabal. I distinctly remember quoting Vladimir Putin on western claims he was homophobic and that gay athletes at Sochi would be in danger: