CNN has reported that waves of violent protesters have descended on the G20 Summit in Hamburg to show their ire against US President Donald Trump – NOT their anger over world elites have damned the world to a pitiful hell. Early reports reveal as many as 70 German police having been injured. In one report the desperate mob brought out a giant blow up dolphin to terrify the 20,000 German storm troopers in Hamburg. 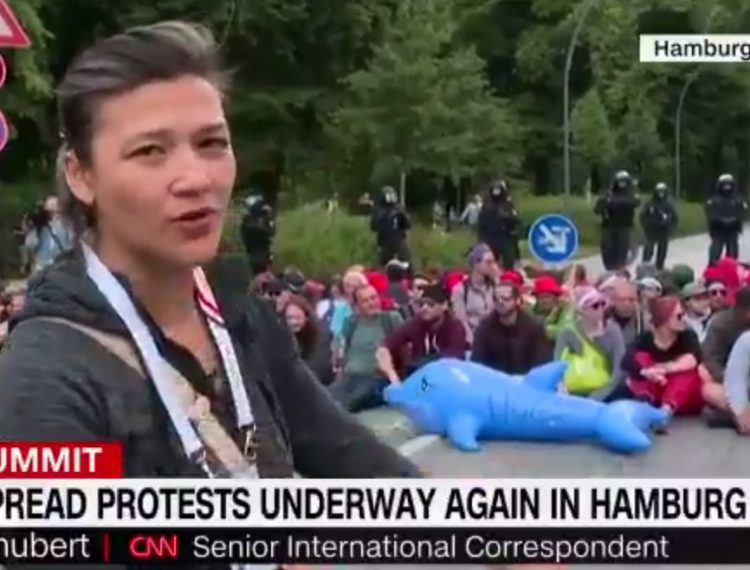 Yes, the same networks revealed to be pimping the Trump-Putin viewer ratings are now bringing you a G20 bloodbath that has already seen a firecracker injury, 20 or more cuts, and bruises, and an aggravated summer cold for one officer who got wet while manning a water cannon. BBC and other major mainstream networks covered early protests in what British journalists called “clashes” in between about 12,000 protestors confronted by nearly twice as many police. Yeah, Germany is this pitiful. I know, we live here.

If you listen to the CNN reporter in this video, you’re bullshit alarm and your idiot alarm will immediately go off.

G20 protests in Hamburg have turned into “a cat and mouse game between police and protesters,” says @atikaCNN https://t.co/dU9ltr5Oxg pic.twitter.com/U8zVF2rqLp

Deutsche Welle is running live updates on the G20 events too, but the official tone mimics the CNN one in that “Trump” is the target of protest demonstrations, rather than the dystrophy globalist economics have caused in global markets. From a journalist/analyst perspective, I cannot decide which is more idiotic – pretending the Trump-Putin meetup does not scare the hell out of Angela Merkel and her socialist/liberalist backers – or the idea citizens are not already familiar with the real “fake news”. Both aspects of this circus in Hamburg seem equally juvenile for me. Anybody who even tuned in CNN after that network was busted for outright lying to people, should be sent to a penal colony for three years to wise up. As for DW and the other German media, Merkel’s government, Axel Springer or Bertlesmann run them all.

I laughed so hard when CNN ran footage of the big blue dolphin in front of a “sit in” in Hamburg, I had to postpone  business meeting.

The bottom line this morning is this. If Donald Trump and Vladimir Putin do not take this opportunity to separate themselves from Merkel and the other psychotic puppets in Europe and America, they missed their best chance ever. Imagine the dismay, horror, and confusion they could cause with the announcement of renewed good relations! Luxembourg (I was at the US Embassy there yesterday) would shake as if earthquake-stricken from the sheer panic of bankers there. Frankfurt would close down business. EU boss Jean-Claude Juncker would be caught drunk driving naked at some French resort within days. And the ensuing celebrations from normal people would freeze the internet and social media.