“Only two things are infinite, the universe and human stupidity, and I’m not sure about the former.”  – Albert Einstein –

Have you noticed lately, not only is stupidity from our leaders never ending, it’S ever more frequent and relentless too. Watching events play out on the world political stage these days, it’s painful. The sensible observers out there, they just have to feel they’ve embarked on the RMS Titanic. Our world is just-that-screwed-up. 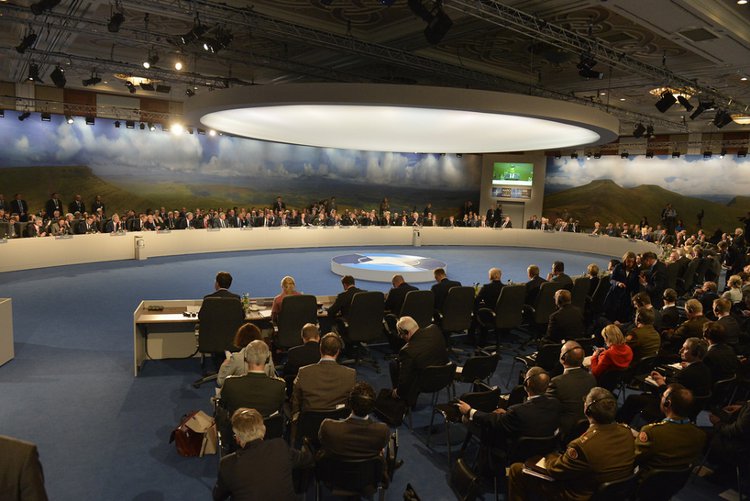 As proof this is no apparition, proof you’re not dreaming some lucid nightmare, take a look at the NATO-Wales meetup this weekend in the image above, then look at the  mainstream media headlines.

“NATO grapples with how hard to push back against Putin over Ukraine,” this awaits all those Los Angeles people picking up the LA Times this morning. Now get this, NATO marches ever closer to mother Russia for years, then “grapples” with how come Vladimir Putin pushes back! Hell, NATO grapples with every task before it these days. Look at ISIS. While a posse of whacked out terrorists takes over half of Syria and Iraq, Anders Fogh Rasmussen and his merry men run around the western world churning up business for the arms manufacturers.

And the most powerful leader in the world, what does he have to say about it all? His latest gig has been drumming up business in Canada, check the headline there: “NATO chief Anders Fogh Rasmussen urges Canada to boost defence spending.”

I could go on, and on, but what’s more ridiculous than the arrogance and stupidity of these leaders, is the utter disregard they have for the people they serve. Take the protests going on outside the Wales Summit (image above), one has to hunt for news on that. It’s as if the electorate around the world do not even exist for these people. For proof, take a look at the situation today, leaning back there in your easy chair on Sunday. Look at the situation, leaning back there in your easy chair on Sunday. One year ago, almost to the day, Vladimir Putin wrote an Op-Ed to the American people on the New York Times. The piece was entitles; “A Plea for Caution From Russia.” The editorial was a tipping point that skewered the Obama administration’s, and the NeoCons’ intentions of invading Syria. You remember it, I know you do.

12 months, a few thousand Ukrainian lives, thousands of Palestinians dead and buried, millions homeless and displaced, and America is headed off into Syria and Iraq again. I’d call that relentless stupidity, wouldn’t you?  And on top of imminent war in the Middle East, now we have a Cold War with Russia and probably the BRICs. Are you feeling the mighty tug of madness at your pajama bottoms? I sure am.

Just in case you’re a die hard Obama idiot, that’s the New York Times as I type this. No doubt my friends at the snake handling church back in North Georgia, they’re preaching a sermon on just this this morning. Need more? How about MSNBC? “Obama ups pressure on Putin.” Let’s see here, the last time Obama “upped” the pressure, Putin sent a 200 truck aid convoy across the Ukraine border without permission. The time before that, Putin at long last retaliated with counter-sanctions that smashed 150,000 business people in the EU. Now NATO is going to put boots on the ground on the borders of Russia? The image below of the American president in Estonia the other day, it speaks volumes. Obama did not come to Europe last week to make peace, he came to make war.

Amid all this debauchery, sitting here in my pajama bottoms, two things peck away at the back of my brain. Two questions, however inappropriate they may be, gnaw at me every day. “If the Obama backed Petro Poroshenko regime in Kiev are the good guys of Ukraine, how come they are shelling their own people in Donetsk and Lugansk?” Better yet; ” If the pro-Russian separatists are so evil, where are the thousands of images of dead Kiev civilians?” I mean, figuring out the bad guy most times involves following the dead innocents, doesn’t it? But the second question badgering me, it differentiates the white hats and black hats for me.

“If Israel is defending herself, why are all the dead babies in Gaza?”

You see my point, I know, but do you detect a linkage here? Is all this chaos going on by chance? Or is there some invisible hand pitting the United States against nearly everybody? What is the purpose of all this “policing” from Obama? Do you really believe he gives a damn about you, me, or democracy? Come on, just because Oprah said he did? Well, even she took her support back. It’s clear as crystal now, the American President is a pawn. The people don’t trust a thing he says, but somehow power still resides there at 1600 Pennsylvania Avenue.

And, the lead in for another New York Times article reads:

“President Obama escalated the American response to the marauding Islamic State in Iraq and Syria on Friday, recruiting at least nine allies to help crush the organization and offering the outlines of a coordinated military strategy that echoes the war on terror developed by his predecessor, George W. Bush, more than a decade ago.”

The so-called “War on Terror” is still going on, but against far deadlier foes, perceived or real. $4.4 trillion dollars later, 350,000 dead from combat alone, nearly 970,000 disabled American soldiers, this is the Cost of War organization’s conservative estimate  reality of Iraq and Afghanistan. You cannot imagine how much money $4.4 trillion dollars is. The easiest way to bring this home to you is, without these wars you’d have $16,000 for every member of your household extra right now. As for the far reaching effects of this folly? It’s inestimable.

Now you tell me. Is the world a safer place today? Are you better off than you would have been without Clinton, Bush, and Obama, and the people pushing their buttons? I mean this ideal was what Ronald Reagan used to defeat Jimmy Carter! Come on, are you better off?

13 months ago we were at peace with Russia. Then US Senators and boxing heavyweights flew to Kiev to incite riots. Barack Obama and western agencies assisted the same ISIS now butchering people across parts of the Middle East. Americans are paying for bombs and missiles for Israel to kill helpless Palestinians in Gaza with. We are backing revolution in Venezuela. The rest of South America, countries like Bolivia, Ecuador, Venezuela, Cuba,  Brazil and Argentina, these all condemn the so-called ‘US war on terror. But what’s worse for Americans is, Obama’s attempts to isolate Russia are really isolating the United States. It’s like through all this sick diplomacy, we’re building our own jail cell around us, to keep out the world we are trying to take over.

Even the most sinister, greedy, and Machiavellian “Big Brother” I can envision, he’d be pitifully stupid to pursue the world we are headed for. This Sunday morning we read our crispy newspapers at the threshold of disaster. While Barack Obama sets down Air Force Two inside Stonehenge for some sightseeing, another human being somewhere buries a child his policies killed DEAD. He does not want you to be cynical though. So, he’ll blame it all on Vladimir Putin so you can feel good about the America you live in, and a bit less revolutionary in your actions. Meanwhile the “least” stupid among us, they echo the same melody:

“We are in danger of destroying ourselves by our greed and stupidity. We cannot remain looking inwards at ourselves on a small and increasingly polluted and overcrowded planet.” – Stephen Hawking –

Who did you say is under Satan’s spell?