It’s almost over. My colleague from Holland and I decided in my garden last night, America has been ultimately isolated from most of the rest of the world now. Barack Obama and a few well placed neocons have managed to accomplish what empires could not. We’re betrayed from within, the world is truly sick and tired of American hegemony and bullying, and a new star is rising to the East, a familiar one by now. 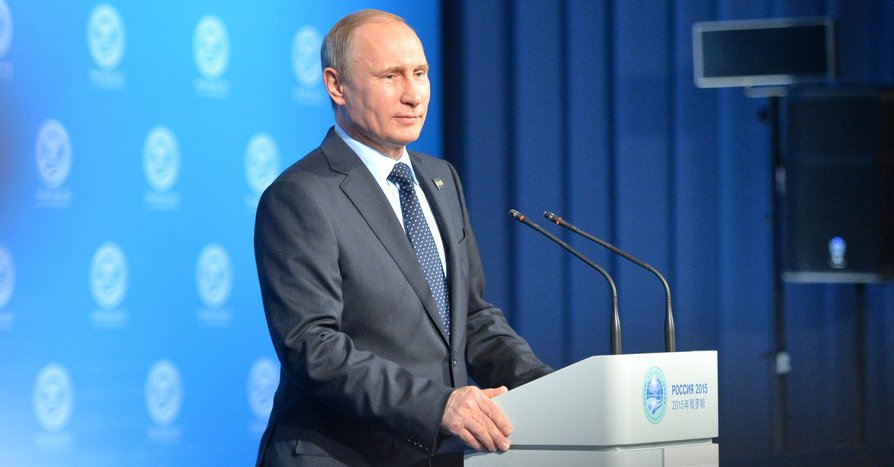 When Russian President Vladimir Putin gave a press conference at the BRICS and Shanghai Cooperation Organisation (SCO) summits in Ufa the other day, I noticed a familiar smile. Not that I am the Putin analyst mind you, but a visibly tired leader could not hide the unmistakable signs he’d won a substantial victory. Aligned with two thirds of the world’s people now, Russians are at the center of the world stage, not New Yorkers or California’s in crowd. The heads of 15 countries from three continents met in Ulfa to announce their individual and collective coming out, out from underneath the shadow of the United States’ business interests.

Mr. Putin’s meetings in front of and behind closed doors culminated in concrete agreements to not only situate these associations onto the international stage, but to establish a framework for cooperation in foreign policy, establish expanded mutual trade, and for a vast array of investment and technology exchange potential. Without declaring it so, Russia and these other countries effectively excluded the United States and her allies from a immeasurable potential. The so-called “emerging world” is the new world, sure as hell. But there’s more… to quote from Mr. Putin’s summary address:

“…for the first time in the 15 years of the SCO, the decision was made to increase the number of members. We signed documents to begin the accession of India and Pakistan. Therefore, the SCO’s capabilities to react to modern threats and challenges will grow. The organisation’s political and economic potential will significantly expand.”

Please understand the significance here. On one side of the economic-strategic coin we have the United States and an ever more fragmented alliance of western nations. On the other side it’s fair to assess a progressive group with virtually untold resources and potential. Once mortal enemies, such as India and Pakistan, are now aligned in mutual interest for the betterment of people in those countries. Looking at India and China in particular, once these countries were on a collision course for conflict, but today we see each logically aligned. The advantage and synergy are clear, North America is now the island, and Britain has a long since overdue insignificance, while the EU simply struggles to remain afloat.

All things considered, adding Eurasian Economic Union’s bid at overthrowing the dollar as the top world currency is a clear enough sign my countrymen are in big trouble. My Dutch friend, the strategist, he offered up what could be a coup de grâce for American hegemony yesterday too. And in this, sadly, Holger Eekhof may be right. Speaking on the German-America relationship, Eekhof sharply condemned recent Washington administrations:

“If the Germans throw America out of the country, which they may well do, it is over Phil. It is not Germany that is so dependent on the US, but the reverse. America is now isolated and in trouble.”

I have to agree, and especially given latter developments in between the US, Germany, and the IMF over Greece. It’s abundantly clear some midnight meeting over the Greece exit took place in the wake of the Greek referendum, but the IMF threatening to strand Angela Merkel and the Germans over the bailout? This Reuters report cements Eekhof’s contention. Now the pieces begin to fall in place. The new economic playground is set for Mr. Putin and the BRICS to surface, the IMF leveraging geo-strategy over the EU and Greece (backed by US and Brit bankers), and Germany is forced into the toughest game of all. behind the scenes, already the FOREX and stock changers are at work again, making their billions betting on news from Greece. The chart below shows what happens in Shanghai and Tokyo when the Greek vote in parliament sided with the EU and IMF side.

Merkel is confronted by Frankfurt bankers with their hands out, an America with no good intentions (see NSA spying game) trying to force her to commit economic suicide, and the remaining world sailing away with Vladimir Putin at the helm. As Eekhof told me yesterday, “it will take only one missed step, and America is done on the European stage too.” He’s right, without Germany as a base of operations (economic or military) Putin may as well have reinvented the USSR, and then some. The sad part is 99% of Americans know nothing of geopolitics, and 100% of the country still believe we are in the 80’s. We are not.

Mr. Putin outlined for a reporter from Russia One, the dangerous situation for the American and world economies. Speaking about Russian and BRICS economic difficulties, and on the EU-Greece mess, the Russian president commented on America’s debt situation:

Sooner or later Americans (and Germans) are going to have to face facts. Most western democracies have been “feeding” off other countries at the core level of society. Subsidized gas prices, rampant and unsustainable consumerism driven by greedy corporations, and a collective dumbing down of the citizenry will soon have catastrophic consequences. For decades Americans have consumed a disproportionate glut of world natural resources. Every house in the United States is full to the attic rafters with cheap, environmentally disastrous plastic junk. Smart phones discards are a prime business, the garbage dumps are full, and steaming the last grimy bits of oil shale from exhausted oil wells is fueling the death throes of the greatest nation on Earth to date. The infographic below tells the tale on this, North America with Western Europe consume 60% of the world’s resources, while half the world outside these regions live on about $2 a day. It’s actually a miracle the emerging world took so long to strike back if you think about it.

So what’s the answer, what’s the end game for western leadership? There are no easy answers, successive White House administrations have all but doomed America’s chances to lead the world into a new era. Looking at the IMF, the Bretton Woods glee club, they’re trying to force Germany to back €90 billion more euro to bail out Greece. This will end up not only breaking the banks, but the people of the EU already suffering from massive devaluation in “living power”. Credit for the potential home owner in Germany and other states has all but dried up, taxes eat away at every small entrepreneur, and Brussels funds projects aimed at defending against Russia a sub-continent already lost to austerity and deflated hopes. Many of the problems we now face can be traced back to IMF or Bretton Woods history, but most notably something called the Nixon Shock.

Without boring the reader with needless history lessons here, suffice it to say we’re now at the end of a “paper money” catastrophe put in place by money lenders. The Nixon Shock took place when an American president made the US dollar effectively worthless by ending it’s being backed by pure gold. The IMF system set in place after WW II is in reality useless today because of so-called on freely floating fiat currency values, as compared to those backed by cold hard equity like gold, silver, and/or such precious resources as diamonds or land. Then president Nixon went on national TV to tell the American people the simple effect of this move was to stabilize the dollar. And it did. But the move did so by making dollars into an imaginary value, a currency based on hot air, worth whatever some bankers said it was worth. As we are beginning to see, this world currency is really worth nothing at all if the rest of the world denies it.

After more than 18 months of open economic and political warfare against Vladimir Putin and Russia, the winner is emerging. The desperate media push by the mainstream in the west, unreason at every turn by Barack Obama and his constituents, it’s all a foul game now being spotlighted. The IMF’s Christine Lagarde (above) was named by Forbes as the 5th most powerful woman in the world just last year, but the question remains, “powerful for what purpose?” Many would say as an instrument of powerful bankers in the western hemisphere AND for American policy maneuvers. This report by Karen Maley of the Financial Review shines more light on the Greek bailout folly. But the folly this time is a last ditch effort to keep Greece in the NATO herd, and at least marginally out of Putin’s Eurasian Economic Union. Short version, Obama and the neocons were terrified the EU would give up on Greece, and that the hegemony with Europe in tow would end abruptly. Legarde is being heralded as the savior of Greece recovery today (Her majesty’s Guardian says so), but in reality she saved the day for the White House and Buckingham Palace, or at the bequest of both. Merkel is actually the only EU leader who fully understands the folly of this bailout scam.

However positive recuperating detente may appear to be today though, the Obama administration has irretrievably hurt America. The fact Germany’s Merkel was dead set against the IMF bailout strategy tells us being the illegitimate stepchild of US policy no longer sits well with the Germans. Apparently the Americans and Brits are pulling out the French card to further the game that is already over, the globalization ship sailed years ago, America cannot survive in its current state without the community. And the community has been leveraged, debt ridden, bombed, sanctioned and brutalized for decades now, the latest signs are from Athens and Greeks feeling betrayed by still more austerity news. In a very real way, Obama and his allies never really stood a chance. That is, unless leadership had chosen the higher ground. The low road, the easy and greedy way, will cost every generation of Americans dearly in the years to come.

Next time I’ll deal with the real wealth of Asia, and the relative poverty of western resources by comparison, and the international conglomerates so dependent on Russia’s resources.