Why aren’t more people amazed, and incensed, that the western mainstream media propaganda assault on Russia just never-let’s-up? Yesterday the Wall Street Journal had the unmitigated audacity to headline their news “The Putin Body Count.” Referring to the more than 4,000 dead in Ukraine we had a hand in, the newspaper breeches insanity, leading me to wonder; “will Vladimir Putin help dig western media’s grave? 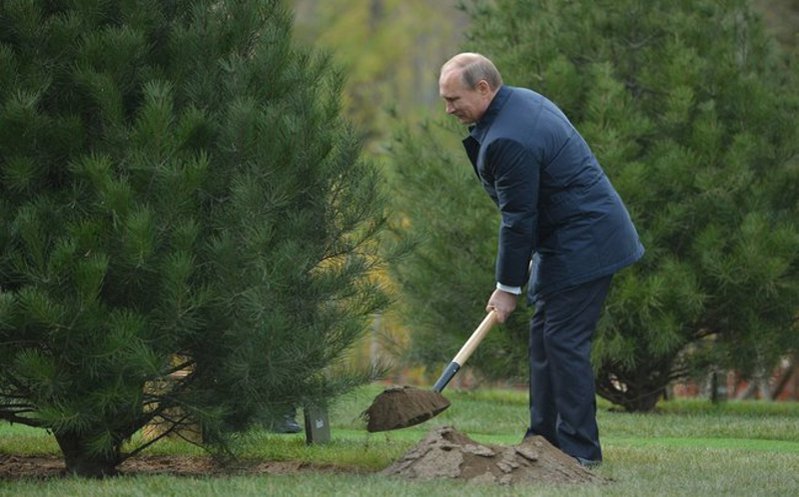 Let me repeat myself for effect here. The Wall Street Journal. THE WALL STREET JOURNAL. Now growing up as a kid, I used to sit across from my dad as he read this financial newspaper, and the New York Times too. He was, you see, once Attorney General of the state of Georgia, so he had to be a voracious news consumer. Dad read everything from the Atlanta Journal to the TIME, keeping up with the latest news daily. Witnessing what’s happened to American press these days though, it’s no wonder the world’s in a mess.

The story yesterday went something like this, the WSJ leads in:

“Russia’s military assault on Ukraine threatens the survival of an independent state and peace in Europe. Often overlooked is what the invasion—and that’s what it is even if President Obama and the Europeans are afraid to utter the “i word”—has meant for Ukrainians in lands taken by Vladimir Putin ’s forces.”

Just Who Does Wear the Black Hat Today?

Is there a need for me, or for anybody for that matter, to point out Washington’s part in the upheaval in Ukraine? Is there still anybody out there unclear as to the real causes of Ukrainian dissent? Barack Obama assaults the US constitution almost daily, and meanwhile his puppets in the EU cause their own people suffering on account of ridiculous sanctions. Is it me, or can anyone else hear the distinct sound of someone(s) laughing, the wringing of evil hands over the Cold War II?

Breaking news for you, my dear readership, the mighty Wall Street Journal is owned by Rupert Murdoch (above), the media billionaire most adamant about getting Barack Obama into office. And since I’ve mentioned this kingpin of western media propaganda, it seems appropriate to ask the reader if he or she has knowledge of Murdoch’s investment interests? Or, do you realize he meets regularly with other players in the global energy and investment game, players like Saudi magnate Al-Waleed bin Talal (who’s got a 1$ billion tied up in Citigroup)? (a Citigroup director was found dead in his apartment with his throat cut this weekend. Shawn D. Miller was the Global Head of Environmental and Social Risk Management (ESRM) for Citi.)

) Are you watching these movements, noticing how Washington meets with the same people Murdoch and other western “oligarchs” do? These are questions you should be asking. Why Al-Waleed has even got an Islamic studies program of his very own at Harvard. Who says “money can’t by you love?” If you’re wondering about Saudi royalty’s agenda here, just follow the money. This Wall Street Journal “suck up” to the Saudi prince spells Obama’s latest agenda out. Read it and weep for Syria’s Assad.

I quote from Matthew Kaminski from exactly one year ago:

“Mr. Obama’s recent Hamlet act on Syria surprised and infuriated Riyadh. After the worst chemical-weapons atrocity of the war, the American leader heeded long-standing calls for military intervention, then hedged by asking for congressional approval, then nixed airstrikes in favor of a disarmament pact with Syria’s Bashar Assad.”

Bad Guys Hate Good Guys
Let’s be clear on one thing, Vladimir Putin and Russia stand opposed to whatever shenanigans the US, UK, EU, Saudi Arabia, and other oil cartel leadership are up to. And the leadership of each of these hates Russia and Vladimir Putin for various reasons, all competitive. One does not have to know the “exact” wheeling and dealing going on to know billionaires only care about one thing. However sorted the quest for oil or arms dollars (or rubles) may be, it’s what profit buys that dictates right or wrong for a people. Here on mother Earth, we’ve few examples today of how Saudi oil trillions, or Rupert Murdoch wins have helped the so called “free people” of the west.

On the other hand, Vladimir Putin’s quest to “surface” Russia as an economic power, it’s revealed a lone superpower free of debt, and somehow clinging to traditional Russian values. In short, for the people he represents, Vladimir Putin is John Wayne on a white horse. And the western oligarchs hate his guts. A friend of mine who’s prolific on social media said to me once recently; “We’re not wearing the white hats in this one Phil.” No kidding, American are stagnated, almost flat busted, robbed, abused, and manipulated, and worse, most do not even realize it. All one has to do is turn to France and Le Monde diplomatique , to get a perspective on what’s really happening. Michael Klare writes:

“Iraq, Syria, Nigeria, South Sudan, Ukraine, the East and South China Seas: wherever you look, the world is aflame with new or intensifying conflicts. At first glance, these upheavals appear to be independent events, driven by their own unique and idiosyncratic circumstances. But look more closely and they share several key characteristics — notably, a witch’s brew of ethnic, religious, and national antagonisms that have been stirred to the boiling point by a fixation on energy.”

How does it feel, the itching sensation everything you’re told by CNN, FOX, BBC, and all the US newspapers is false? Uncomfortable for many, I am sure. We’re asked to believe (over and over) blatant misrepresentations, lies bought and paid for by the very people who profit from our loss. The curious among you might ponder, “Why would Saudi Arabia have a key role in Iran nuclear talks?” They were once described as “brotherly nations” back before Iran had blows with the US. Up until Mr. Putin stepped in on the US Syria intervention too, the only discord between the countries was trivial. The reason Saudi Arabia is interested now though, has more to do with Iran’s natural gas resources than with Atomic bombs.

News flash: “Iran has twice as much natural gas as the United States and Saudi Arabia combined!”

Now we begin to see why the United States has shunned Iran for so many years. The philosophical and misleading notion Israel feared an Iran bomb, this was and is subterfuge. Sure Israel is paranoid, but American and Saudi billionaires invest in energy, airplanes, and not necessarily “kill all” A-bombs. Who is the good guy here? I’d say look at just “who” is condemning Vladimir Putin. Let me assist you.

What do Rupert Murdoch, Dick Cheney, Michael Steinhardt, and Lord  Jacob Rothschild all have in common?  They’re all associated with a venture called Genie Energy. This shale energy conglomerate has its drills in American shale exploitation, Israeli energy efforts (though the Israelis are lately angry at Genie), a direct competitor with Gazprom, especially if we look at their recent Mongolia exploration. So, what you have in a nutshell with Cheney and Murdoch as energy advisors there, is a type of collusion, maybe worse. The connection, for you, in between “The Putin Body Count” and Rupert Murdoch paid employees is well made now.

What’s scarier (or should be) for you and me is the fact Murdoch and the other media moguls in on this bash Putin campaign could care less what you think. Murdoch, the western leadership in London and Washington, they’ve no fear or reproach even. The 1% has become so arrogant, so powerful, they fear not reprisal from the populace. Some would say the world going to hell in a hand basket, why it’s all our fault! Here, here’s where Rupert Murdoch joined Genie Energy’s advisory board.Now tell me the Wall Street Journal is unbiased! Go on, try.

Here is a quote from the 2010 press release from Genie, it is TELLING:

“Rupert Murdoch and Gene Renna obviously bring vast experience and immeasurable value to the Genie Strategic Advisory Board.  Their legendary accomplishments and eminent characters speak for themselves,” said Genie Energy Chairman Wes Perry.  “Their decision to join Genie’s Strategic Advisory Board speaks to the fundamental importance and urgency of our mission to rebalance global energy production markets.  I join the other Board members in welcoming them and look forward to working with them.”

The Obama administration is not the only guilty party where shafting the American people is concerned. Just about every politician in Washington (of not every single one) has been set in place by people like Murdoch. We all know this instinctively, and from our forefathers. Politics has alway been about lying, backstabbing, and putting a hand in somebody else’s pocket. It’s just never been so blatant, unapologetic, and disastrous. For God’s sake (as my dear departed Mom would say), Wall Street crushed the American economy, robbed Americans, then robbed them again via the administration, and nobody did a thing. The NSA shattered the Constitution of the United States of America, and got by with it.

I found this quote by one of the world’s most interesting leaders of the past. Haile Selassie was Emperor of Ethiopia almost 5 decades, heir to a dynasty with traditions back to King Solomon and the Queen of Sheba. The quote below mirrors what many great leaders have said, but I use it for the purpose of revealing the evil humankind has suffered for eons.

“Throughout history, it has been the inaction of those who could have acted; the indifference of those who should have known better; the silence of the voice of justice when it mattered most; that has made it possible for evil to triumph.” 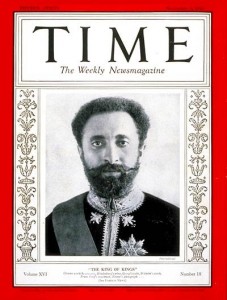 Here we are, silent but for a few, witnessing atrocities of immeasurable and wanton hurt, by the same evil. Not unlike Putin, Haile Selassie was revered as a savior by millions for his wisdom and courage. He was also imprisoned, dethroned, and his family murdered after a coup d’état’ in the world’s oldest monarchy. History recalls Haile Selassie (on the cover of TIME at right) as the single figure who defied fascism’s grip on his people. Though Mussolini’s Italy took Ethiopia, it was Selassie who galvanized and represented a people not defenseless against aggression. History may well tell of a Russian leader who defied an even more insidious takeover. For make no mistake, if not for Vladmir Putin not a Russian value would stand before rampant capitalism gone rabid.

How can I say this as an American? I’ve watched half a century men like Murdoch bastardize my beloved country, that’s how. I watched Bernard Kilgore’s paper my Dad and his contemporaries counted on, turned to garbage since 2007.