When Rome fell, the days preceding must have been utter madness. The only way to fathom the lunacy of the last few days is within the context of the ancient history of human conflict and disaster. Donald Trump and his contemporaries in the UK and France have traversed the boundaries of being frightful minions into the realm of spine-chillingly horrific. If humanity was on the ever on the brink of Armageddon, current events herald our eventual self-destruct. But wait. What if the whole deadly show is just that, a show to create more trillionaires?

A few hours ago the President of the United States used a social media squawk box in an international pissing contest over his own ego, and his warped sense of the world around him. When the Russians warned that the killing of any of their personnel on the ground or in the air over Syria would provoke a counterattack, Donald Trump saw fit to whip this out:

“Russia vows to shoot down any and all missiles fired at Syria. Get ready Russia, because they will be coming, nice and new and “smart!” You shouldn’t be partners with a Gas Killing Animal who kills his people and enjoys it!”

Moments later I got 20 Twitter messages, half a dozen phone calls, two requests to appear on TV, and a dozen emails asking “WTF?” By the end of the day I was being approached by Greeks here on Crete wondering if we should all head for the caves in the south of the island. The world was in a collective “Huh?” daze. Even media pulled a “Scooby Doo” head waggle wondering if Trump’s Tweet was the signal to “duck and cover” before the Russian missile launch to come. I make fun now only because there is no emoticon for the potential holocaust these psychopaths are steering us for. Western geo-policy is just FUBAR (Fucked up beyond all recognition). Let me attempt to illustrate.

Donald Trump gave up American service personnel by announcing his administration’s intentions of attacking Syria over an alleged use of chemical weapons by President Assad. First, we must forget the moment that Assad using illegal weapons on his own people having already won the proxy war in his country would be madness and stupidity. Then we must imagine Vladimir Putin’s forces anywhere near Syria to be on high alert and moving to counterattack should U.S. coalition forces intercede. Put simply, U.S. naval and air forces in this part of the Mediterranean might well have been eradicated. At the moment President Trump shot off his mouth (Tweet) The U.S.S. Truman, the U.S. Navy’s 6th Fleet carrier group ordered to lay off Syria, it was in Norfork, Virginia thousands of miles out of range of responding. Secretary of Defense, former Marine General James “Mad Dog” Mattis covered Trump’s ass fairly well leaking to the media the Pentagon had no proof of Assad’s supposed war crime. I’ll admit, most of us took the bait in hopeful relief the hegemony might not murder us all.

Hope, at least these days, is really in short supply. And Donald Trump giving the “go ahead” to rain missiles down on Damascus targets (however remote) shattered any I had. I guess a decision had to be made as to have to save the face (and ass) of the American president. I am sure the target selection outside Damascus’ most populated areas had little to do with concern for loss of life (or WW III), and everything to do with keeping the billionaire building contractor and golfer from looking like a total nincompoop. Fortunately, most of the intelligent world still sees a spoiled brat Rex Tillerson called a moron.

Forget Trump though. In France, the people are being asked to believe that Emmanuel Macron wages wars based on DGSE (Directorate-General for External Security) deep intel. Unfortunately for the poor French, Macron uses social media and Inspector Jacques (Pink Panther) Clouseau genius in order to justify blasting people for Total S.A. energy. Talk about causing shivers, another 3-foot tall French pencil neck wants some world conquest in his dossier. Good God, only the bad teeth and old-lady fashions of Theresa May rescue France in this fiasco.

For May’s part, she just hasn’t a clue. Put puppet, the UK Prime Minister reminds me of an America soccer mom with a power complex. She’s a hormone attack waiting to blister the British Isles with Russian warheads just because. Because whoever is in charge in London needs a big, bad war to cover up the misdeeds. PROOF! You crazy bitch. You have to show people PROOF before you get us all killed! Let me get off May, she is just pitiful.

As Americans, we all know the kind of animals we’ve put in the Oval Office these last decades. They’re the bred mediocrity we’ve delegated to do the job no decent human being would want. We left it to them to play bagman for the Rockefellers and Fords. Once they were tolerable though. Nixon, at least he was smart as a whip. JFK? He got his brains blown out for being the last president who gave a damn. And now Trump is the White House “Spanky in Chief” (as a Twitter pal dubbed him). Read his cover-up Tweet while aircraft with Americans in them were being fuelled.

“Never said when an attack on Syria would take place. Could be very soon or not so soon at all! In any event, the United States, under my Administration, has done a great job of ridding the region of ISIS. Where is our “Thank you America?””

Again, America’s Spanky in Chief is stupid, wimpy, out of it, and just plain wrong. America didn’t do squat to kill ISIS. Russia, Iran, and Assad destroyed ISIS and Al Qaeda in the region. The Pentagon and the CIA figured out ways to let the terrorists escape so they could fight Assad some more. Come on. This attack had three objectives.

First, before this ass saving mission was hurriedly slung together, the Israelis and the coalition planned a last-ditch effort to unseat Assad. Second, the chemical weapons narrative Theresa May’s government started with the conjured up Skripal poisoning needed a cover. Finally, Trump and these other maniacs could only play stock market manipulators by front-shirting Putin again. Yeah, odds are this whole world crisis mess is some Hillary Clinton-ish blackberry buy and money-making scheme. Think about this. The snapshot of leading defense contractor General Dynamics below is a random case I selected. Imagine a portfolio of defense stocks and the credit to buy or sell millions. Raytheon is up $14 a share since last month. Northrop Grumman is up $10 bucks in a month. And, Lockheed Martin Corporation is up $11 dollars a share since March 14th. Why do you think Vladimir Putin cut off titanium supplies to Boeing in response to the Syria missile onslaught? That’s right, the stock dived almost $12 bucks since a high of $338.90 on Friday. 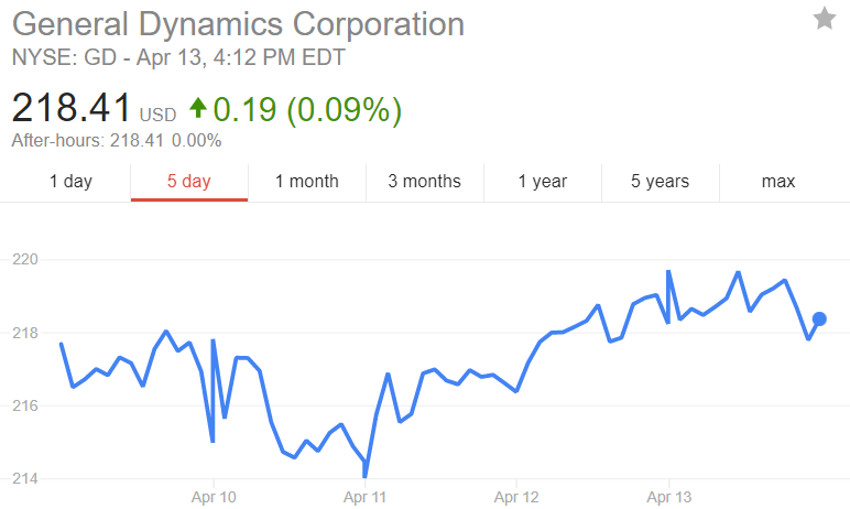 What about British killing machine makers and Theresa May’s Hitler rhetoric?  BAE Systems plc is on a bonanza since she and Parliament began jumping up and down yelling “Kill Putin, Kill Putin, Kill the Ruskies!” This one defense stock gained $15 per share since last month. At one point, probably before a huge selloff, it had gained over $23.40 per share over March 14th price. And this is just one company in one sector. What about the upstream and downstream market manipulations. It is worth mentioning that before May promised to help BAE, the company had planned to lay off over 2,000 employees owing to the United States grabbing all the big defense contracts.

Talk about insider trading, these Rothschild minions could be raking in trillions and trillions just running their mouths on TV. I don’t know about you but I think Tyler Durden at Zero Hedge needs to investigate politician holdings hidden in shell companies. Look at QinetiQ Group, the UK’s defense technology giant. Since Trump confirmed the war-triad would go to war in Syria the company stock gained almost $22 dollars a share overnight.

Macron? You wonder the next logical question about French defense contractors, I know. Well, Thales stock has skyrocketed gaining $12 dollars a share since Macron put on his Napoleon face. 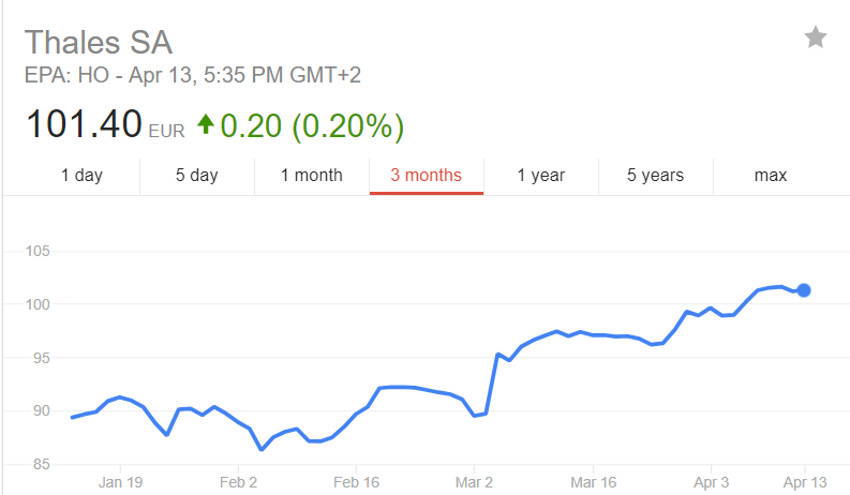 If often wonder if the sick joke is not simply on us.

US Secretary of State Rex Tillerson and Russian Foreign Minister Sergey Lavrov just gave as joint press conference after both men met with Russian President Vladimir Putin in Moscow. Naturally, the two spoke of a “productive meeting” on a broad range of issues from Syria to Ukraine, and the degraded relations between the two great superpowers. Neither men conveyed

Neither men conveyed no real sense of hope US-Russia relations would be on the mend anytime soon. Then all hell broke loose over Syria.

A Sputnik News report some minutes ago tells us the Syrian General Staff reporting a US-led coalition attack struck a Daesh depot storing chemical weapons in Deir ez-Zor yesterday. The Sputnik report said a report they obtained from Syrian Army affirms Assad’s and Russia’s contention a Syrian attack on Idlib province on April 4 was not a chemical attack on Assad’s people, but a direct hit on an Al Nusra weapons stash:

“The jets of the so-called US-led coalition launched a strike at about 17:30-17:50 [local time, 14:30-14:50 GMT] on a Daesh warehouse where many foreign fighters were present. First a white cloud and then a yellow one appeared at the site of the strike, which points at the presence of a large number of poisonous substances. A fire at the site continued until 22:30 [19:30 GMT].”

Secretary of State Rex Tillerson gave assurances Assad had killed his own people at the Tillerson-Lavrov press conference and expressed ultimate confidence in the “intelligence” the Trump administration counted on before launching 59 cruise missiles at Assad’s Shayrat air base. The Independent reports:

Syrian state-owned news agency Sana reported the air strike, on the village of Hatla, as a “white cloud that became yellow as a result of the explosion of a huge store that includes a large amount of toxic materials”.

If this most recent report holds up, our world just turned upside down again. If the opposition forces are proven to have committed all these false flag attacks on the innocents of Syria, the New Democratic Order Donald Trump swore to run from Washington’s “swamp” are over. The BBC, CNN, the Washington Post, The New York Times, almost all “fake news” is over. Furthermore, once the Trump administration comes forward and reveals being misled by the US intelligence community and some members of congress, the “deep state” Trump’s team has alluded to is “over”.

So far no mainstream media has reported on the Sputnik report, so it remains to be seen how the liberal press will react. Warmongers John McCain and military industrial complex lapdogs like South Carolina’s Senator Lindsey Graham will be in a real pickle as well. I’ll make another report once more details emerge, but this is a real “game changer”.