U.S. President Donald Trump and the raging Pied Piper’s followers hate climate activist Greta Thunberg. Just ask him, he’ll gladly Tweet out a snarly cut against a kid. Hell, Trump will smack a puppy or hurl a baby, if they get in his way. But this report is not about Donald Trump. This story is about the powers that need climate change debunked, at least for a little while longer. Greta Thunberg is a victim of her own passion, and of the mediocrity that has been the environmental movement.

When 16-year-old Swedish activists Greta Thunberg became the target of Trump and his armies of climate change deniers, the battle lines for the real Armageddon were laid down. As humanity digresses further and further down the moral toilet drain, nothing is sacred anymore. Kids, pooches, Christ, nothing is insulated from the white-hot blaze of human hatred and self-interest burning through the core of Earth. A story I wrote at Zero Hedge incited a few naysayers to condemn me as either an idiot, a Thunberg cultist, or somebody unworthy of continuing a journalistic career. One reader was “kind” enough to educate me on Thunberg’s climate hoax by linking me to this Wrong Kind of Green chastisement of the kid climate activist. Behind the scenes, there are environmental evangelists upset over Greta’s fast rise to fame.

To save you reading, Cory Morningstar is the only god of planet sustainability. The investigative journalist turned messiah. Cory, you see, is the only human being capable of doing good for the planet – except for all those who blindly follow her and share her links in order to bash the rest of us. Three times in as many days, I’ve been confronted by the name of a person I barely heard of. Wrong Kind of Green? Something about this brand just eats at me. Maybe I’ll find it later on. For now, all the hoopla over Greta seems to be on two fronts. The elites of the world hell bent on “growing” at Earth’s expense, they’re either slinging mud or sidling up to Greta. The other segment out to get Greta are the failing environmental celebrities who Greta just photobombed.

Anyhow, after I was attacked on my own Facebook feed by far-right Rusky sympathizers who’d friended me to get closer to Vladimir Putin, Greta’s plight became more tangible for me. Imagine a world where issues and arguments are all about self-interest. Think about all those fairweather friends out there in social media land who are ready to pounce like Gollum (Smeagol) from the Lord of the Rings when the timing is right. I know you are with me here. So read on.

People who pray to Cory Morningstar seem to be the same group that truly believes a ranting billionaire playboy president really cares about people and America. Divisionists, if I may put a name to them, are the far right that has been marginalized for good reason. They’re the opposite side of stupid-crazy from Hillary Clinton supporters who wore vagina hats when they marched in Washington. Extremists, who are just so pissed off because they can’t cut it, they’ll attack anything that moves. Easy prey, for evangelists who want power. Which is what the climate change mess is being transformed for. By both sides, I might add.

On Facebook, I had to unfriend some bozo for claiming Thunberg sailed the Atlantic on a sexy luxury yacht. Then another “friend” demanded that Thunberg is sponsored by Dow Chemical! To be interested in Thunberg and her #ClimateStrike effort is a sin. To support young people getting out in public about an important issue like the environment! This is sacrilege before the goddess of tree huggers.  If I like what Greta says, I am against Trump, a leftist liberal scumbag, and not fit to take in air. According to people who spend their days as assistant manager at McDonald’s, and their nights slugging back Budweiser yelling at their browbeaten wives, “Ella, get the goddamned phone book, so call that Phil Butler communist and tell him what for. Yeah, I see you. The ones who hate the white middle class, the lower-middle-income blacks, and any Hispanic who gets within 500 meters of the U.S. border – ever in his or her miserable life. Let me quote from an interview Morningstar gave the CORRECT Kind of Green in answer to a question about the “left’s” failures in the west:

“Yes, this is very true. I would agree that it is a huge failure. There are many reasons for this I believe. I will name a few. The majority of our “left” is comprised of privileged, almost exclusively white middle class. The same 1% class of people creating 50% of the global greenhouse gas emissions. It is incredibly difficult to persuade someone to look in the mirror when all those who surround him/her are demonizing fossil fuel corporations as though industry is somehow separated from society and the system itself.”

Here is the problem. Let me lay it out in simple terms. 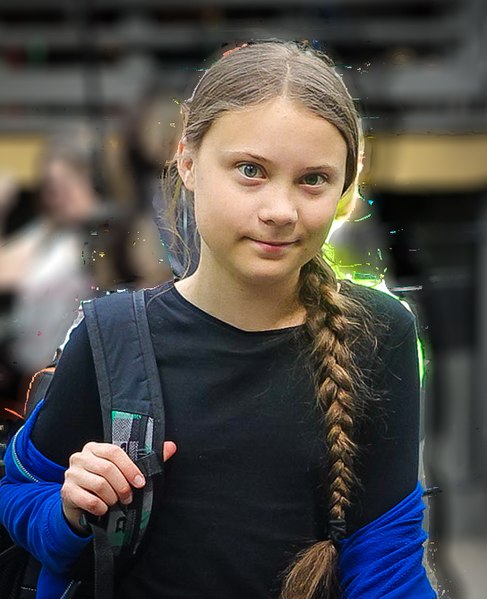 Greta Thunberg is a little girl. She is standing up for what she believes is right. She has come to represent a youthful generation that is not willing to go quietly into the night like the rest of us did. Whether or not she is backed by the evil geniuses of the world is another matter altogether. The “cause” is just. The root ideology is good and intact, despite what pariahs like this Morningstar say. Maybe this is the “wrong” kind of environmental movement. Maybe the corporate moguls and the 1% do stand on the sidelines wringing their hands. There is evidence that some do, and evidence that others are against Thunberg. Take the second richest man in the world, French luxury mafioso Bernard Arnault. He calls Greta “Demoralizing” in this Bloomberg story. Let me reiterate here – Greta Thunberg is a little girl. She is not all grown up so unscrupulous French billionaires get to call her names. And this is the way I was brought up. Hate me if you will. I am miffed at Greenpeace too, they became the NGO from hell, but there is good in those people too.

I don’t want to make this post about any single climate naysayer, idiot, or psychopath billionaire, but Arnault just begs for it when he admits Greta is a “dynamic young girl” and then sets out to vilify the courageous child. Arnault is in the Rothschild circle, one of those people who came out of the middle of nowhere to rule the world. He’s the French Jeff Bezos or Bill Gates. Somebody who invented nothing was nothing, and then suddenly stepped out onto the world stage like some Vaudeville act. This guy started his march to fame by selling his Dad’s business under the table, then buying bankrupt French textile conglomerate Boussac with the proceeds, and then laying off thousands and selling that to fund his luxury pursuits.

The guy’s a privateer, a pure predator, someone devoid of a soul. Beside’s his controlling LVMH, the world’s largest luxury-goods company, his Groupe Arnault SAS 100 % of Thomas Pink, The Echoes, Investing, The Journal of Finance, Radio Classique, SID editions, Knowledge of the arts, 65 % of Château d’yquem, 50 % of De Beers Diamond Jewellers , and of Château Cheval Blanc, 8,43 % of Carrefour, according to Wikipedia and other sources. Half of De Beers? This should stand out for anybody hugging trees out there. The world will never forget what De Beers has done for the environment. But billionaires “got there” by caring about us like Trump cares about us. Let’s lay off villainous billionaires now. I need to get back to work.

I do not know Cory Morningstar. Maybe she is a real sweetie pie. I am not that knowledgeable about the Wrong Kind of Green movement either. I know I’ve been beaten over the head with both brands by whackos who want Trump for world dictator over the last few days. I read through some of their dogma, Morningstar’s and WKofG too. Some of it reveals the right kind of passion for saving our planet and ourselves, in the same way Greta Thunberg and her activist followers exhibit passion. Maybe this is what set of alarm bells in my head the last few days. Maybe I am doing a knee jerk reaction here, just taking up for a kid who other kids should admire. Maybe I am right to assume everybody has an agenda? Funny, I have not heard or seen Greta posting article after article with Cory Morningstar’s picture plastered beneath headlines like “Extinction Rebellion Training, or How to Control Radical Resistance from the ‘Obstructive Left’.” Hell, I am not even sure this is human speak, just to be blunt. Moving on.

The Wrong Kind of Green people say their bible is the People’s Agreement of Cochabamba, set in motion in Bolivia, back in April 2010. The proclamation starts with, “Today, our Mother Earth is wounded and the future of humanity is in danger.” I have not read the agreement in full, but it starts off well. They were worried for all the right reasons from hunger and environmental disaster to the capitalist system that has led to our current state of screwed up affairs. I have campaigned on my own, since about the time Obama pulled out at Copenhagen. It’s a bit funny my path never crossed these people’s. I agree with everything I have read from this agreement. But, I think the people attacking Greta Thunberg have not heeded their own instructions, to wit, the world they would save is one where people like Greta Thunberg are denigrated for cause.

The People’s Agreement of Cochabamba says they “propose the attached project for the Universal Declaration on the Rights of Mother Earth, in which it’s recorded that:

Clearly, there are many attacking Greta who would gladly deprive her of the right to exist, to be respected, to operate freely, to maintain her integrity, and perhaps even the right to food and water, if the truth is told. Who is going to restore Greta Thunberg’s dignity and hope, if the billionaires, the psychotics, end the environmental narcissists prevail?

Maybe I am barking up the wrong tree here. Maybe not. Let me leave you with another passage from this People’s Agreement. You read it and tell me if the young people Greta represents are not mentioned where “action” is needed. Tell me what she did to become a heretic to these people?

“Emphasizing the need for urgent action to achieve this vision, and with the support of peoples, movements and countries, developed countries should commit to ambitious targets for reducing emissions that permit the achievement of short-term objectives, while maintaining our vision in favor of balance in the Earth’s climate system, in agreement with the ultimate objective of the Convention.”

I feel bad to criticize people like Cory Morningstar. I don’t want anyone to suffer indignity or undue criticism. The environmentalists, the people who truly care about humanity and our planet, our future, they should be together. This is the problem. Are people critical of Greta Thunberg because of her relative meteoric rise to prominence? Is saving our planet something that is to be individualized like a celebrity personalizes a saying, cause, or cliche? Is “Our Planet” only savable if Tony Robbins or Lady Gaga is out to save it? Or, do we all live on different planets? I wonder why we cannot fight together for the common good.

That’s all I have to say about it today. I hope everyone steps back and examines the real motivations for damning a little girl before giving her a fighting chance to change things. Is that such a hard thing to ask?