The headline from the mighty New York Times read; “France’s First Lady, a Confidante and Coach, May Break the Mold”. Then authors Susan Chira and Lilia Blaise script out for readers a fantastic new portal into a French Neverland, fawning over Brigite Macron, the new first lady of France. Anybody who has a conservative bone in their body reading will certainly need a strong gag reflex. “Oh, my God” (OMG) the NYT has finally gone over the edge. But not alone.

The piece in question is a kind of masterful segue I’ll admit. I’ve never read a more exacting and concise lead, followed by a more gripping meat cleaver departure into utter horror. Excuse my metaphor and just read from the fourth short paragraph:

“France being France, this unusual couple is already stirring a lively and erudite debate about sexism, ageism, masculinity, contemporary marriage, political stagecraft and what a modern French first lady should actually be.”

My first thought on reading was; “So when does the new emperor ordain himself the new Caligula? The New York Times duo continues with citations from gender crazies like Natacha Henry quoted saying:

“It’s like a breath of fresh air in this country. I think he won because he didn’t do any kind of macho performance, and that’s what we need. If she’s done that for him, great.”

Oh yeah, France is there alright – the new ruler is already transfigured into a transvestite married to his grandmother authority figure, a Prometheus metamorphosed into what the NYTs calls “a welcome antidote to past hypermasculine French politicians”. This is the new reality. A four-foot-tall Humpty Dumpties’ and Sissy Sarkozy were the French people’s macho men? France, my friends, is in for the ride of its life. Turn the page, QUICK, before what’s left of Europe catches this madness.

On the new left’s choice for France’s utter destruction, Jeff Bezos’ Washington Post is already explaining away the fact Macron’s schoolteacher robbed the cradle. The liberal tabloid completely misses the point, rationalizing the irrational fact he was just past toddler when he started to hook up with his married-with-children bride to be! Age was not the issue, but let’s turn the page like I said.

Quartz has taken to assigning editorial to New Democratic Order plebes like Samuel Rebo, who’s a researcher for Eurasia Group, in order to create new realms of forensic journalism. Rebo’s “Could Vladimir Putin—the godfather of populism—be vulnerable to his own creation?”, it’s the latest prayer on the altar of anything goes. On que the hopeless and hapless caped crusader of gays in Moscow, Alexei Navalny appears out of the blue Russian sky. I can hear the theme to the Superman TV series playing in the background, as Rebo recounts the courage and bravado of this Slavic superhero:

“Few figures in Russia have better harnessed popular frustrations with the venal corruption of the political class than anti-corruption crusader Alexei Navalny, whose presidential campaign bid has been repeatedly blocked by the Kremlin—and, yet, his campaign brought more than one hundred thousand people to the streets a few weeks ago. Navalny, like his populist counterparts in the West, dares to discuss what the establishment ignores.”

Quartz risks much in allowing fledglings like Rebo to cite “sources inside the Kremlin” to validate his fantasies. This is particularly true when Rebo’s being a protégé of former Ambassador to Russia, Michael McFaul comes out. An ultra-liberal Democrat, McFaul was the architect of U.S. President Barack Obama’s disastrous policy toward Russia. For those unfamiliar, McFaul’s associations with the likes of Putin haters extraordinaire is well documented. McFaul, and now his mini-me Rebo, are poster boys for the tiny fraction of Putin opposition inside Russia. But Sam Rebo is actually a prototype of the new western “think tank” minions – analysts paid to play at propaganda and to think a lot less than normal human beings. Thinking and real analysis have absolutely nothing to do with what Quartz is putting out these days – the “message” is the mission.

It does not take much headline scanning to discover what’s behind 99% of what is in Google News. The New York Times and the Washington Post are extended “Fake News” platforms now, and one can find the minions of the so-called “Deep State” at institutions like Eurasia Group, whose clients include major investment banks, institutional investors, government agencies, and multinational corporations. It should come as no surprise that Eurasia Group is directly tied to Nikko Asset Management, which is in turn partnered with Banque Privée Edmond de Rothschild Europe. The more I research the new world crisis, the more I realize Putin is all powerful if there’s any good in the world.

When western leadership chose to bash the Sochi Olympics with groundless allegations back in 2014, something in the soul of sport died. The reverberations of the sadistic politicizing form that moment, has now reached a deafening roar in Rio de Janeiro. At the epicenter stands the International Association of Athletics Federations‎ (IAAF), and organization sworn to be the equinox of fairness and excellence. Here’s how business and PR, the politics of greed conquered sport, and assassinated scores of athletic dreams. 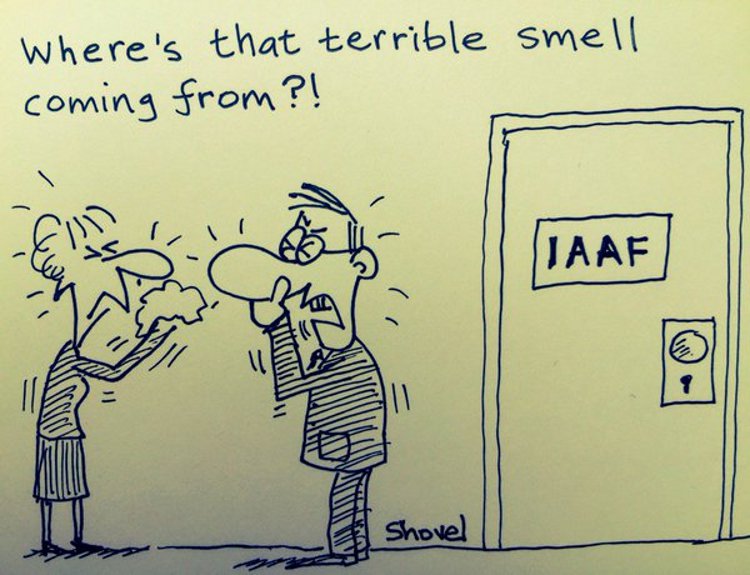 Sebastian Coe is the President of the IAAF. A two time Olympic champion, Coe was made a Lord by virtue of his rise in the world of British sport, and his connections to the industrialists. Taking the common path, his golden reputation got tarnished a bit, when he was associated with former IAAF consult, Papa Massata Diack, the world’s most wanted doping scandal godfather. Miraculously, Coe has been tasked with redeeming the IAAF’s and his own reputation in his new assignment as grand inquisitor of cheats. With a dual purpose in mind, the insiders of sport assigned Britain’s most influential sportsman to destroy a political enemy — and Russophobia reared its ugly head once more. The wetwork of killing off Russia’s athletics will go down in history as the most unsporting disaster ever perpetrated, I promise. A whole team punished for sensational and sometimes ludicrous claims. The KGB passing pee cups through walls… Holy God.

The banning of every, single, solitary Russian track & field athlete from Rio 2016 bears the stench of wrongdoing most people would only detect at a mafia massacre. I cannot be bombastic enough here, to let the uninformed reader know how onerous the IAAF has become. I can however, shine a spotlight on this organization’s operations. Their hiring of a Publicis Media Group PR guru as CEO is a veritable starting gun for a coming BS race. If you were upset over booing in Rio, or Russia’s downfall at the hands of these sellouts, get ready for the ultimate cheat.

Olivier Gers, is the UK-based global president of LiquidThread, a division of Publicis, which is headed by French business mogul Maurice Lévy. Once again, in my quest to tie together the world chaos movers and shakers, I find the customary linkages to the Rothschilds. But Lévy’s membership in Investment Partners is less important here, than the role Gers always plays. The media and entertainment executive is what I would call a “PR wet work specialist”, a reputation rescuer who helped the former Silvio Berlesconi media conglomerate Endemol emerge from the throes of being billions in monetary indebtedness and trillions in bad PR branding back in 2010-2011. Let me make this clear for the non-PR professional out there. Yes, the IAAF’s reputation and Lord Coe’s, they are just this bad. The lords and ladies of Great Britain, the big brands that sponsor every tennis show on every athletic foot, they stuck their firmly taped sporting wrists far too far into the athletics cookie jar. The IAAF needs an Usain Bolt of reputation management. Oh yes, before I fail to mention, Rupert Murdoch was involved in Endemol on the fringes too. As for Coe, someone once called him the “unelected Baron of self-aggrandisement through sport”, which I find befitting his past and current posture.

Let me ask the question here; “If the IAAF had not lied like its pants were on fire, then why would trust need to be reestablished?” I owned the most influential PR news media in Europe with my wife and partner for years. So, I understanding just how badly these people messed up is framed perfectly by how high up the roster IAAF’s rescuer is. Get ready for a media blast of herculean magnitude from the wonder boy the media cabal has stuck at IAAF. No wonder Coe is in Rio hugging every gold medal winners like long lost brothers and sisters, he’s standing on the sports banana peel of banana peels. And gladly, I am here to try and give him and his sports management conglomerate CSM a shove. Yes, you read that correctly, the guy in charge of killing Russian athlete’s careers is in business in promoting sports too. Talk about conflicts, I want to see Gers wave his magic wand on this stinking doodoo in the middle of an Olympic track. I wonder if Olivier Gers will assume a role at Coe’s company before long? Let’s see, the dogma at CSM says:

“We help build businesses, brands and organisations through the power of sport and entertainment.”

You don’t say? Now I am wondering which brands the Russian track team members are wearing! Maybe they had to go, in order not to diffuse the Adidas or Toyota or Seiko brands? Well, it looks like Gers is already on the job advising Sebastian Coe to cozy up to winners, and spreading some more Coe-Legend stories around. Gers is of course the expert at creating and spreading content around, so look for the coming attempts to water down bad press with hyped bullshit about Coe and the wondrous IAAF. I’ll have more as time progresses, but if there are any negative Coe/IAAF stories out there, please contact me for reporting the issues.