Six months ago German Chancellor Angela Merkel looked 20 years younger than contemporary western politician Barack Obama. The latter, an American president tagged “worst ever,” he’d have to gain weight to resemble a skeleton about now. Something happened in those six months though, because the Deutsche republic’s leader looks almost as gaunt these days. What manner of decisions must drive these people? It’s a question we probably should, but seldom do ask. If Obama’s karma is making him into Jack Skellington (as below), then Merkel is resembling more and more Bond villain Colonel Rosa Klebb out of From Russia With Love. Whoever is pulling the strings of power in Germany now, he’s twisting the thumb screws on Angela, that’s sure. Maybe those NSA spying stents on Berlin payed off? Who can know?

With the G7 about to take place in Bavaria in June, Merkel went on record to sling more mud on the Russian leadership. She told the Frankfurter Allgemeine Zeitung newspaper yesterday:

“The G7 and former G8 group has always viewed itself as a community of values.” 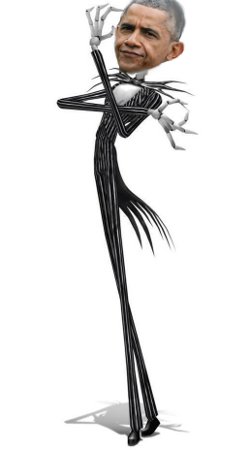 Really now? Formerly the G8, the economic summit that was supposed to solve for “X” where free world money matters are concerned, it’s failed, failed, failed, and failed some more to stabilize a monetary house of cards that now threatens the world. Sounds dire, doesn’t it? Well, it is. The euro zone is in deep peril, sanctions on Russia over mostly allegations from Washington, the further imperil all the nations of the EU. Ramped up oil production by the Saudis (at the behest of the US State Department) they now threaten hundreds of thousands of jobs and dozens of smaller energy companies.

Forget about World War III and Ukraine in flames, the corporate titans are on a roll since the Great Recession began in 2008. The G8 helped create another 1,000 billionaires, now the G7 is all about banning a dozen of those who are Russian, and Putin over his disruption of their NWO. We’re in a colossal mess, and Frau Dr. Merkel runs her campaign for sainthood.

Just last week Last week, Merkel said lifting sanctions on Russia would be impossible until all the points of the peace agreement signed in September between Ukraine and pro-Russian rebels are implemented. Mrs. Merkel! As I type this, you know as well as I do, your Germany back Kiev junta is shelling to death their own countrymen in Donbass. Even if the mighty BBC and CNN won’t go to Donetsk to film video, reporters like Graham Phillips do. Mrs. Merkel, show me the dead babies and grandmas from west of Donetsk! Show the world the proof Russian back rebels shot down MH17! Prove the allegations against Russia! Better yet, show us what the NSA stole from you with their intel.

The only good sign this morning I see, is the tiny glimmer of hope gaunt faces and sagging suits indicate on politicians in the maelstrom of lies these days. Obama looking 200 years old does show once and for all, he is effected at least. As for Frau Merkel, I always thought she was a nice lady. Smart, somehow deeply caring. Playing the heroin though, tagging along in a deadly game of world hegemony, it’s taking a toll from my point of view. And it’s a shame, Merkel is perhaps the smartest in the west, and maybe the most Christian charitable by nature. This makes her job double tough, her father was a pastor at a church in Quitzow, and her religion has played a big role in her life. While Merkel speaks Russian fluently, apparently the old East Berlin days have left some kind of mark we cannot see readily.

While Merkel, France’s Hollande, and lesser EU politicians get the squeeze from Washington, Google News presents a flurry of Anti-Putin rhetorical. Hell, the sellout Kyiv Post has two spots for the query Vladimir Putin this morning. If the casual reader drops in anywhere online in English, Russia and Putin are someplace in between utter collapse and getting the liar-liar-pants-on-fire treatment from a gang of back biting sellout reporters. It’s become the norm, the daily barrage of bullshit, Germany and the EU underlings, still begging for Wall Street scraps.

Pitiful, they’re actually all so pitiful. Hollow vestiges of  mediocrity, as anyone knows selling out is the easiest course. The west, all of Europe, its leadership is on the ropes and drinking their own Kool-Aid. I guess the lecture circuit to come, the $25,000 a plate dinners and the presidential libraries they’re promised, all that bling makes up for being the worst liars in history.

At least I hope so, you see I actually had a lot of faith in Angela Merkel. Too much, evidently.