Last night I laid awake watching TV, trying to hold out for the opening ceremonies of the Rio Olympics. Here in Germany, the best way to catch such events in English is via BBC, so I channel surfed awaiting the 1 AM broadcast. Then the most eye opening program I ever watched went live. A special on BBC Newsnight smacked me full awake. What you are about to read should snap you out of your propaganda induced coma too.

In my waking world policy nightmare last night, BBC veteran host Kirsty Wark stared down at me from our flat screen authoritatively. The dignified looking Wark stood flanked by a stunning graphic bearing a stylized Syrian flag. To one side of the backdrop, Russia’s Vladimir Putin and Syrian President Assad glared menacingly. On the other an austere and grim looking Barack Obama gazed determined at scenes from embattled Aleppo. It is difficult to describe how painstakingly detailed these BBC graphics appeared. However, it is important for you to understand, such productions do not just “happen” overnight. This broadcast was very meticulously prepared, and over some time. 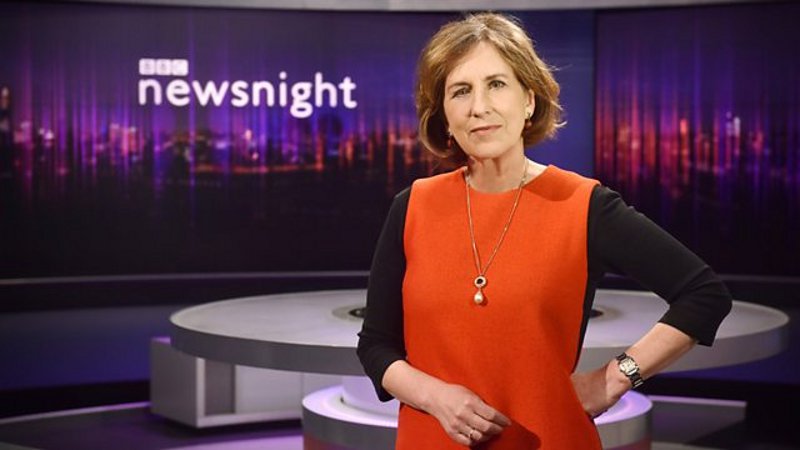 The stage set, the producer having corralled all the “right” interviewees, BBC’s governors unleashed the most stunning bit of propaganda onto an unsuspecting viewer-ship last night. The motive, calling to arms against Russia and all her allies the international community, stunned even this geo-political analyst. Yes, the BBC just called for World War III, and nothing short. You will think I am delusional, but I assure you I am not. Allow me to cite a section from the transcript, just to give you an idea:

“People are just a new as to what is going on in Syria right now. Thousands of civilians are being killed every day, they are bombarded by the Russian air force. The regime is using gas bombs and cluster bombs on civilians.”

The gas and cluster bombs allegation is repeated several times in the broadcast. The host says this, then the interviewees repeat it, and certify the idea. Walk brings in “witness” after witness to help the show resonate how the Russians and Assad are butchering trapped civilians in Aleppo. The fact the jihadists are holding those civilians hostage in the center of the beseiged city is lost amid the barrage of war drums BBC orchestrates. I will not task the reader with the whole dialogue, you can read the incomplete transcript here. The point is, BBC’s witness lineup was made up of anti-Assad jihadists and opposition supporters, and one brave doctor operating inside jihadist held Aleppo. This is important for the reader to understand. A Dr Hamza al-Khatib, who returned to the war torn city to help save people there, he’s the most credible “witness” the BBC show brought forward, but here’s the thing. How could an unbiased BBC team, an unbiased report even emerge, from an area held by Syrian rebel forces. The only way BBC could have been allowed into a rebel held stronghold, is if the jihadists knew the story would be positive.

While the United States denies our bombs killed dozens of civilians in other bombing raids, BBC and the entirety of the western press condemn without any proof, Russian air forces.

Dr Hamza al-Khatib tells his tale of humanitarian truth, while at the same time staying alive. In a land where heads roll at a twitch of an ISIL nerve, BBC marches in past Assad’s forces, and shoots a mini-documentary? But the brave doctor’s obvious dilemma is not the story here. Neither are is the parade of witnesses to what Wark repeatedly refers to as a Russian massacre taking place. The horrible truth of this BBC setup report is the broader implication. In the transcript you can count (type Control F to bring up text search) the number of times “Russia” is mentioned in the broadcast (23). You can also look for barrel bombs (4), or Obama (10). This is an interesting method to discover the big message. Now I will reveal what the big message from BBC is, with regard to World War III.

One would not expect former US Secretary of State Hillary Clinton to come up in such a production about Syria. Well, unless of course you had investigated the real causes of the Arab Spring and the Syria civil war. But amazingly,  this special programme on the war Syria brings Clinton in full strong. Wark sets up straightforwardly, two Syrian rebel sympathisers to answer to whether or not a President Hillary Clinton would do better than Obama. Their answers sent a chill down my spine. I’ll explain why in the summary. When another doctor and rebel sympathizer says Obama has been weak in dealing with Assad and Putin, Wark sets him up:

To this the subject replied; “I think she would she would take a more aggressive stance.”  Then Wark brings on Bassma Kodmani, Spokesperson for the Syrian Opposition from Paris to discuss the Obama administration’s handling of Aleppo. She echoes the same sentiment as the second Syrian doctor, only totally unsolicited, and as if by magic:

“Hillary Clinton may be more determined in her policy, but in the meantime, we will have thousands and thousands of people killed in Syria without any reaction.”

There had to be a rehearsal. You see it don’t you? Let me galvanize for you, just how “set up” this BBC broadcast was.

The people Wark interviewed, the set, the production, the dialogue, the message of this broadcast had a dual purpose. First, the further vilification of Putin, Russia, and Assad was a mission. Bringing on Bassma Kodmani to appeal for Americans to elect Hillary Clinton, shows how idiotic the BBC thinks viewers are. Kodmani, who has been funded by the Ford Foundation in the past, is the lady on the inside for the elites intent on overthrowing Assad. Bassma Kodmani  was at the 2012 Bilderberg conference to discuss with the Rothschilds and Fords of the world, how best to overthrow President Bashar Al-Assad and install a NATO-friendly administration in the violence-stricken country. And BBC rams her down British throats along with Hillary for president? But wait, the story gets better.

Wark finally marches forward Philip Gordon, former special assistant to Obama on the Middle East from 2013 to 2015. It is his “testimony” that tells me America and the world is set for a cataclysm. It is in this segment that the BBC 2 host lets fly the idea of the US and the Europeans going to war on the ground in Syria against Russia even. The lead in was subtle, compared to where BBC ended up in this broadcast. The former Obama adviser covered his former boss pretty well, but he also inserted the idea full scale regime overthrow was on the table in Washington at a point. Wark next led Gordon into the whole Hillary as commander-in-chief reality:

“If the head of that next administration is Hillary Clinton, and she is a woman you have worked with and how does her policy in Syria differ from Barack Obama’s?”

His opinion on this was less revealing than the assured look on his face when he said; “We’ll have to wait until January 2017.” Then it hit me. “They will stop at nothing to put Hillary Clinton in the White House. This election is a done deal.”

I recall an interview Wark had with Guardian reporter Glen Greenwald about his reporting and Edward Snowden. The interview ended up being an interrogation and condemnation of Greenwald, Walk sounding more or less like a prosecuting attorney. I mention this because Wark is the Brit equivalent of CNN sellout Christiane Amanpour, the corporate-governmental wenches ruling elites use like puppets. Both convey the “big” messages, if you read in between the lines. We are witnessing the greatest show on Earth, a circus with a choreographed finale.

Putin and Assad have opened safe corridors for civilians and surrendering rebels to exit Aleppo. RT reports jihadist rebels having summarily executed civilians trying to flee through these safe passages. The corridors have been mined on all sides by Al Nusra and so-called moderates, and the zones are continually shelled by the insurgents. But BBC does no report this. The video report above shows Assad’s troops and Russians delivering aid, and maintaining these corridors. BBC does not report this. A few days ago a Russian chopper was shot down by the Jihadists killing all aboard. When the bodies of the slain airmen were defiled, dragged through the dirt and spat upon, jumped on like human trampolines by the barbarians, BBC did not show those images.

BBC wants Clinton in the White House. BBC is sure she will be there. A newly released Hilary Clinton email confirmed that the Obama administration deliberately provoked the civil war in Syria. One email released by WikiLeaks begins:

“The best way to help Israel deal with Iran’s growing nuclear capability is to help the people of Syria overthrow the regime of Bashar Assad.”

BBC wants to help Israel. BBC wants to help Hillary. BBC goes to every length to revise the truth of Syria, just like Libya and Ukraine. BBC’s expert, the Bilderberg spokeslady Bassma Kodmani is in the WikiLeaks Syria Files trying to oust Assad since before 2006. Kodmani had some dealings with the French Ministry of Foreign Affairs and other policy makers. While dressed in human rights activist garb, Kodmani and her affliates like SNC spokesperson Obeida Nahas in Istanbul lobby for more weapons from the US for the rebels. What this all amounts to is undeclared world war – madness – a vast web of collusion and subterfuge with chaos the only seeming end. And at the head of tomorrow’s chaos – Hillary Rodham Clinton. This Spiked article goes so far as to say Clinton hand picked the Syrian opposition to Assad.

Finally, the former Director of the CIA, Michael J. Morell has come out boisterously for Hillary Clinton in the New York Times this week. With almost everyone in the current establishment of the western hemisphere pounding out “Hillary, Hillary, Hillary”, he is perhaps the scariest of all. Even BBC and the Queen Mother herself could not top this psychopath’s gesticulations in favor of this scary woman. Let me quote from his article:

“I was at President George W. Bush’s side when we were attacked on Sept. 11; as deputy director of the agency, I was with President Obama when we killed Osama bin Laden in 2011.”

Morell, who is a certified butt kisser and back stabber, was a CIA message boy when the Weapons of Mass Destruction lies fueled the Iraq invasion. He later became a CBS analyst, only stepping down to evangelize Hillary for President, no doubt to secure a cabinet post or CIA directorship.

The implications are made crystal clear, and are capitalized by Morell’s castigating of Donald Trump, and his seamless insertion of Russia’s Putin into the Clinton equation. The massive money and influence aimed at getting Clinton in office, the ignored evidence she has already rigged the election, lunatics and warmongers coming out of the woodwork, the whole mess can only lead to one piece of advice from this writer. Americans had best load their guns and pack their bags. Guantanamo fairly awaits anybody rising up to defeat these demons.

Clinton is the apparition biblical scholars have predicted for eons. It is time to head for the hills. The good ole’ boy expression is; “Time to get the hell out of Dodge”.