I remember the name calling from the grammar school playground. Pointing fingers, a “one-up” on thy human neighbor. I also remember the PE coach exacting a cruel punishment on assholes too. As the biggest bug in the human Petri dish, I was lucky to find a kind of salvation among physical specimens slated for the sports brotherhood. We were lucky, the fraternity of corporal logic – assholes suffered hard. And who wants to suffer on account of being wrong? Knowing wrong, righting wrongs, isn’t that why we love hero movies? Lately, I guess not – for we seem lost.

Maybe I was just a “good boy”, or maybe fairness just appeared logical through my Earthling insect eyes. Whatever the reason, I have always despised sneaky little cheats like the ones dominating our world today. And now I am finally pissed. And this is where men like Putin get their brethren from, from those pissed enough to stand up. Verily I say unto you all:

“The world has no room for cowards.” —  Robert Louis Stevenson —

The simple folk has it easy, you know? In my days as a wandering redneck up in the hills of Georgia, politics and the big brain, big bucks world of the bankers was just something to detest from a distance. How simple it was to just ride the back roads of humanity – oh how easy life was then – in the protected collective ignorance. Back then, somebody calls you a name, you just bust his face or body slam him on the concrete. Like I said, detestable politicians and their cruel intentions lay far off from the real simple man. And by God, they mostly leave you alone too. But BAM!

BAM! In this life you are confronted by what you avoid. Like water seeking its own level, if you have got a propensity for something it finds you sooner or later. The memory of riding in Doc’s Jeep up on the mountain to go shoot our guns floods in. Back then we often took off the stupid dumb-fuck masks for each other. Yeah, a big bear of a country boy with a 30-06 on his shoulder and camouflage everything he was. But most of his ilk are not near so obtuse as they seem. I assure you there are mountains of clarity up yonder in them hills. You can see if mighty quick if you go up there and are honest. Georgia boys know about Henry Kissinger alright. But they’d just as soon no be reminded of their dead brothers in Vietnam.

So I am asked every other day; “What made you such a friend of them there Ruskies?” Or some Google prick comes and accuses me of being a traitor for saying my piece – ain’t that a hoot? Goddamned corporate ass kisser accusing me of some nebulous evil. I ask myself; “What would good ole Doc say to that?” Probably nothing I expect, I’m the one that would try and “explain” how I don’t want to put somebody in the hospital. Yeah, rednecks get downright violent about insults. And isn’t this honest?

Vladimir Putin. Now there’s a redneck superhero for ya. Hasn’t anybody noticed how the Russian president seems to attract the “no bullshit” types like Seagal and Mickey Roarke etc? Call Vladimir Putin a traitor and get judo chopped to hell and back, oh yeah! No seriously, this whole “Kremlin Troll” bullshit you hear is just that. I should know, I sit atop the list of irrevocable Putin agents. You’ll read all about it in my upcoming book though. I just wanted to create a little primer here. You know, spell out for you how come Putin gets a following while pussies like Barack Obama can only hook up with billionaire pedophiles and Satan worshipping pop stars.

Wake up friends, we never left the schoolyard. The fence just got moved out a few thousand miles. The mean little orchestrators are still here. The ex-best friend who stole your girlfriend or your toys, he’s right here too. Teacher’s pet, budding sociopath, young mobster bent on hellraising, the teases and the bitchin little hussies are around still too. Only the playground is serious now – people starve, hurt, die, or worse based on shitheads’ machinations. And that’s why people like me picked the simpler side – you can tell who’s up to the task and not when you go “down home” in your thinking.

Traitor my ass, Google is the traitor and everybody that buys into their bullshit. The most American thing I can think of is a revolutionary spirit, the God-given ability to swim against the current knowing “up” is not the easy way. Why are people like me classified as bad old Kremlin Trolls? If you’re a redneck you can answer this in one second. If you cannot I feel sorry for you.

I’m reminded of a “Brat” (like a brother in Russian) from call-sign “Texas” (image above). He’s an American boy who heard about kids being blown to bits in Ukraine, and who decided to go play “shoot-em-up” for real in the Donbass. Texas puts his life on the line like them Alamo heroes done did. South’un language is pure strange I know, but MENSA will still accept me. This book I’m writing, I know it will open many eyes – and get some hoots too. The hoots over the dumbasses who believe Putin needs trolls will be my favorite anecdotes.

Oh. You schoolyard sneaks! STFU and avoid embarrassments. I take up for what’s right and for my friends. Take this with you in anticipation of my Kremlin memoir.

“Which would you choose if you could: pleasure for yourself despite your friends or a share in their grief?” — Sophocles, Ajax —

If ever there were an ironic moment in world news, Russian President Vladimir Putin being nominated for the 2014 Nobel Peace Prize is it. At the top of a record number of nominees on the list of Nobel candidates this, Putin may just be a symbol in the end, of how cream rises to the top. A villain to some,  and a noble hero to others, there’s no question Vladimir Putin is the most powerful and influential man on Earth. But is he Nobel material?

Joining Putin on the list of potential candidates were Pope Francis and former U.S. National Security Agency contractor Edward Snowden. The Norwegian Nobel Committee has now narrowed the lists to between 25 and 40 so far, with the final list of a dozen or so set for April. First awarded in 1901, the prize includes 8 million Swedish crowns ($1.24 million) in cash, but the money won’t be the biggest win if the Russian President is chosen.

Ever increasingly, Putin seems to be the man who never loses, especially given wins for Snowden, Syria, Sochi and the inability of his detractors to deter his policies. Even with western media and politicians lined up to assault Putin, somehow citizens of the world admire him. Accordingly, the International Academy of Unity of Nations of the World has taken credit for naming Vladimir Putin as a candidate for the Nobel Peace Prize.

Putin’s nomination comes largely by virtue of his role in diffusing the Syria military insertion by the United States over the use of chemical weapons there. Of course, the recent upheaval in Ukraine is suggested by some to be a big “fail” for Putin now that his nomination is cemented, but should the outcome be determined positive in Europe, obviously this could cement Putin’s Nobel hopes. Speaking of “hopes”, it’s interesting to note the Russian President’s press secretary Dmitry Peskov (below right) commenting to Itar-Tass how his boss has never sought out awards. Speaking on Putin’s motivations, Peskov had this to add;

“The primary criterion for the president is satisfaction from a job well done.” 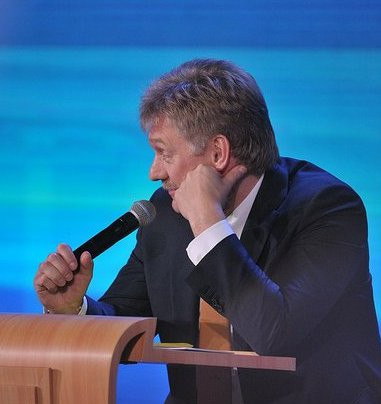 Despite Vladimir Putin’s notoriety and charisma, some claim the Russian President is actually possessed of an almost noble humility, especially in the presence of kids and animals. This character has been seen in many magazine and newspaper articles, and not just Russian ones. Other Russian Nobel Peace Prize candidates have included Andrey Sakharov (1975) and Mikhail Gorbachev (1990), and Putin winning now would encapsulate what has been, by any stretch of imagination, one of the most successful Russian administrations ever to take office. Russia under Putin has flourished in a peacetime atmosphere, where past leadership gained notoriety during cold or hot wars.

At a time when the world has so few real leaders, so few sure fire winners, the continual wins by Putin and his PR machine present at least a test case for what a 21st century world leader should be. If a president should be a man of steel, unscathed by even the most virulent assault on his person or country, Russia has the front runner. If Putin can continue to squash every attempt from the west to impeach him and his policies, the next Nobel Peace Prize will be a well deserved Russian victory. Imagine if Ukraine is soothed, not by EU, UK, or USA rhetoric and strategizing, but without Vladimir Putin’s military having ever fired a shot in anger. I think it was Mohamed ElBaradei who said of the prize he won jointly with the International Atomic Energy Agency (IAEA):

” The Nobel Peace Prize is a powerful message. A durable peace is not a single achievement, but an environment, a process and a commitment.”

So far, even despite 1000 slaps in Russia’s face, the man and his country have managed to turn the other cheek. Now isn’t that something?

Editor’s note: This story was originally written by me for Everything PR News back in 2014.