Someone explain to me so I can understand. How is it that Russia is somehow negligent in influencing pro-Russian separatists in east Ukraine, when the Kiev junta’s forces are the ones shelling civilians daily? Does Germany’s Angela Merkel see something the world cannot? God only knows. 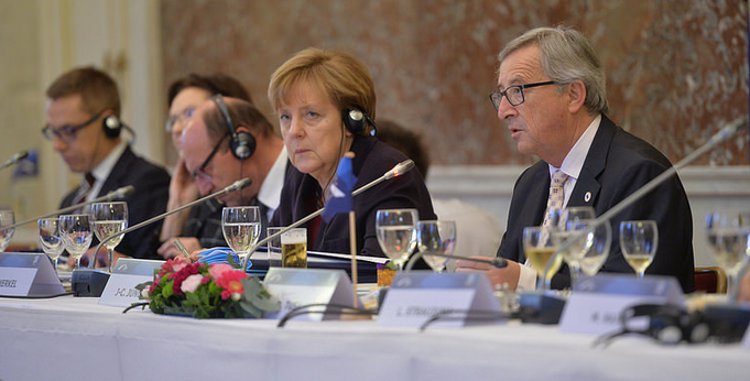 A headline this morning from the Sydney Morning Herald reads; “Angela Merkel tells Vladimir Putin: No Ukraine summit without progress on Minsk peace plan.” Excuse me? Using the Minsk peace plan agreed upon in September as an excuse, the German Chancellor has turned logic on its ear pointing the crooked finger at Putin once again. To quote the Herald story on Ukraine summit suggested by Ukrainian President Petro Poroshenko; Dr Merkel’s spokesman told reporters:

“the Chancellor told Mr Putin that all sides needed to make their contribution to implement the peace plan. That includes that Russia uses its influence on the separatists in order to reach consensual solutions.”

This is disturbing on several levels. First and foremost, the people of Donbass are the ones being shelled to death, not the citizens west of Mariupol and Donetsk. Furthermore, hundreds of thousands displaced by this war, they did not flee to Kiev. Donbass people have fled to Russia. Please understand me, the fundamental problem in Ukraine today is not one of Russian or separatist aggression. If it were, there would be reports of dead babies and grandmothers from artillery shelling in places like Shevchenko (Шевченко), Novopavlivka (Новопавлівка), and to the North in Kharkiv. If Vladimir Putin were not trying to effect a peace in the east of Ukraine, my associates in Kharkiv would surely be reporting hundreds of Russian tanks in town. What Mrs. Merkel’s statements imply, it’s preposterous at the extreme.

The skeptical reader here is going to point to 5,000 western media stories that parrot and support the idea Putin is the aggressor here. Headlines in my country, and all over the west, they echo like some Swiss yodel over the artillery fire coming from the west. Point of fact here, British journalist Graham Phillips from Donbass shares every day the real story of east Ukraine. Why are you not listening and watching?

The BBC does not have a “Graham Phillips” on the ground in Ukraine. Neither does the New York Times or the Sydney Morning Herald.  Phillips, for those unaware, has been the impromptu eyes and ears of the world in east Ukraine since the beginning. Threatened, held captive by Kiev, shot at, expelled into the Polish badlands, and having had a bounty placed on his head, the Brit reporter captures daily the strife that is speaking Russian in fascist held Ukraine. The image above is all that need be said for Frau Merkel’s dillusion, and the one below of poor Misha is an utter condemnation for anyone who supports Petro Poroshenko.

If Russia is attacking the Washington backed Kiev regime, where are the BBC reports? Why is The New York Times not showing us the effects of the horror? If Washington and the west were not responsible, we’d see a Graham Phillips in western Ukraine getting donations for limbless citizens there. I hope I made my point, and if I did…

I’ve made it my job to report on what you’re not being told. Every day I scour the internet and social media to ferret out the other side of our world story. God knows why I do it, but I know the unfairness and propaganda of mainstream media compelled me since years ago. When I read reports like the ones railing Putin, the Palestinians, anybody suffering at the hands of others, my concern turns to our humaneness, and to our future. I’m appalled that more people are not incensed by the fascism rampaging on our world, and by the fascists playing the good guy. Germany has utterly used all the nations of the EU for gain. So has the United States and Britain. And the moment Russia puts a stop to NATO expansion dead innocents mark the territory. This is the ungodly truth. Everyone reading this who is not incensed, not undertaking a solution, you’re the real problem.

This conflict marks the worst crisis we’ve faced since World War II, and once trusted news media only evangelize the Obama administration, the Brit side, Berlin’s socialist “yes” agenda by order of almighty Washington. I wonder at last, what must the NSA have discovered for Obama, to be able to leverage Germany, France, and the rest so effectively? But I wonder when you will stand up and defend the innocents people of Earth, I wonder that on more sleepless nights. Another thing that moves me deeply is how the deaths of a dozen media people in Paris garners worldwide sympathy, when the coup in Ukraine that caused worlds to war gets only State Department press? As utterly gut wrenching as the terror at Charlie Hebdo is, babies blown to bits in east Ukraine bear a darker stain. Of course we knew from the onset the killers in Paris would end up being dead Al-Qaida operatives, but putting the bad guy label on Putin in Ukraine proves it’s tough to brand live targets.

Sorry, but since the shift in US-Russia detentes occurred, we’ve been set back 5 decades to a time when nuclear war was a common talking point. We had our Angela Merkels in Germany back then too. For anyone interested, look up something called the “Christian Occident” and the America interjection of supranational framework into West Germany, the so-called “Free West” mechanism. Merkel, not unlike her predecessors, is “tasked” with maintaining, as the American cultural attache to the Bonn government proclaimed:

“The America Houses represent the visible symbols of our determination to weld Germany irrevocably to the free world.”

Indeed, not only have Americans been brainwashed to fear and despise Russians, the Germans have been conditioned for decades to blindly follow anything Washington demands. Where once the German people made and extraordinary pack of warlike wolves, today they’re mostly mewing sheep who only mutter obscenities when the food supply gets low. In essence, Americans with Lidl and Aldi, instead of Walmart. Politically, you can throw in a hefty resurgence of that “Christian Occident” in the form of the Pegida movement, and controlling what Deutschland says and does is fairly easy. Back during the Cold War Germany had Chancellor Konrad Adenauer worrying over Algeria and the communist grip on all Europe. Funny how North Africa played back then, as it does now.

I know the reader is having a hard time understanding the parallel in between Chancellor Merkel’s recent statements, and free world strategies of the past. But, today is not unlike the day when West German Chancellor Ludwig Erharddeclared that; “there was no country on Earth more closely attached to Vietnam than Germany.” Utterly preposterous to conceive of, isn’t it. That a European nation’s leadership could so vehemently suggest the Vietnam War was theirs? It’s as hard to understand as the demonstrations over Je Suis Charlie, and the lack of outrage over either Donbass or Gaza…

Here we are though. Germany, in all her ultra-conservatism and sheepishness,can feel threatened while threatening Russia in east Ukraine. It’s in a way, worse than national socialism, what’s happened to Germany. To illuminate further,the U.S. National Security Advisor back then,  McGeorge Bundy, offered this for the people to gobble up about the Vietnam conflict for Germany:

“The defense of Berlin, right now, is in Vietnam”

So, the salvation of the Frankfurt banks, the solvency of the EU and the euro, is under attack in Donbass! Only Washington and Berlin started it! Frau Merkel, please go for a double doctorate, only this time in political history instead of chemistry. For the rest of us, if we are to have peace anytime soon, we have to educate ourselves beyond BBC and CNN programming.